10 Important Advantages of Organic Farming You Should Know 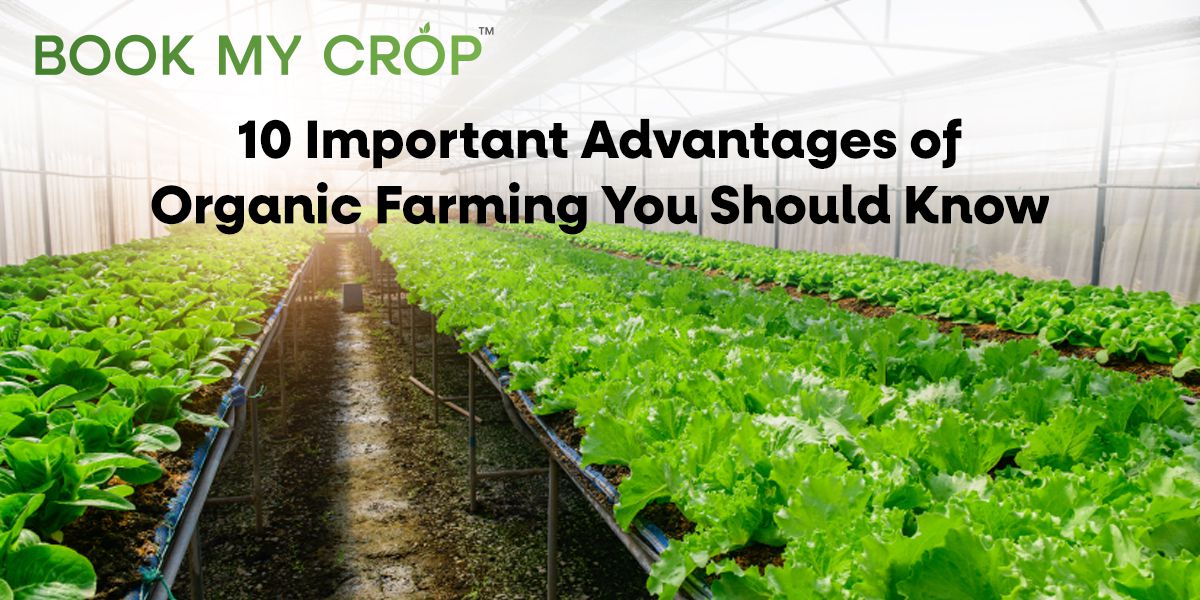 The definition of organic farming has evolved over the years into several forms and perspectives depending on how the term is understood by the individual. However, it is often regarded as an alternative farming technique that dramatically reduces the use of artificial fertilizers and pesticides. The simple crop rotation technique to converting to animal/green manures are both frequent examples of these alternative techniques.

Organic farming is well known for being profitable, healthful, and an ethical decision. Beyond the many benefits that come with it, organic farming has shown to support the health of ecosystems, soils, and people. Here is a list of 10 arguments in favor of the assertion.

1. Reduces the effects of chemicals and pesticides
As a concept, organic farming heavily utilises eco-friendly, sustainable, and raw ingredients to grow secure, healthy products that help a variety of ecosystems. The following are used to support this:

These solutions serve to stop soil erosion and leaching in addition to supplying organic matter by raising the nitrogen content of the soil.

2. Improves and replenishes the soil's health
By eliminating artificial growth stimulants, the soil is given an opportunity to breathe freely and recover naturally. The composition of mulch and soil organic matter (SOM) grows quickly as a result of green manures and composts, resulting in a nutrient-rich soil composition.

3. Reduces soil erosion to a smaller extent
A method used mostly in organic farming, shallow tilling, minimises disruption that is no deeper than 3-6 inches. The top layer of the soil eventually becomes rich in SOM and has a greater ability to retain water as a result of increased soil thickness and cyclical additions of animal and plant-based growth boosters.

4. reduces the negative consequences of climate change
Recent research has demonstrated a direct relationship between nitrogen fertilizer application rates in traditional agricultural models and nitrous oxide emissions. Organic farming has greatly aided in combating climate change worldwide, thanks to farming communities finding their way back to their roots.
The amount of nitrogen per acre is greatly reduced in organic farming because synthetic fertilizers and pesticides are not used. This helps create a system of food production that is safe, yields more food, and does it with less harm to the environment.

5. Promotes water health and conservation
Groundwater is recharged as a result of planting cover crops, applying thick layers of organic mulch, and establishing perennial patches of plants and crops. Due to the avoidance of synthetic fertilizers and pesticides, the refilled water sources actually contain little to no chemical alternatives, paving the way for safer, cleaner, and more dependable watersheds.

6. Improves the produce's nutritional worth
Produce grown organically has less exposure to the heavy metals found in fertilizers and pesticides, making it rich in antioxidants. Additionally, organic produce differs greatly from conventionally produced food in terms of its sugar and mineral composition. Vegetables and fruits produced as a result are of a greater quality overall and are tastier, healthier, and more aromatic.
Naturally, eating organic fruit can naturally help us strengthen our immune systems. Produce is abundant in vital minerals and vitamins that strengthen the immune system due to entirely unaffected crop structures.

7. Provides everyone with a real source of food
Contrary to conventionally farmed produce, organic food is frequently sourced locally. Organic food undergoes less intensive processing because it can be found locally in the city or state where you live.
Furthermore, organic food indicates a better level of transparency. The majority of neighborhood markets and food trucks that sell organic produce buy it straight from farmers and food producers. As a result, an authenticity seal is produced, which can then be given to customers.

8. Increases the produce's shelf life
Because organic produce has higher structural and metabolic integrity, it can grow naturally without the help of synthetic pesticides or growth hormones.
Contrarily, produce grown conventionally goes through a variety of spraying, dipping, and coating processes that build up many layers of toxic residue that is hazardous to both humans and the environment.

9. Promotes the wellbeing and health of animals
Organic farming not only helps many species of animals and plants grow in their natural habitats, but it also safeguards those habitats. The protection of natural pest control is a benefit of organic production since dependent ecosystems develop over time and protect them.
Additionally, animals can graze on chemical-free shrubs and plants and consume safe, healthy produce, which eventually makes its way into their meat and dairy products.

10. Promotes the expansion of biodiversity
In a chemical-free environment, organic farms naturally support a greater diversity of plants, insects, soil creatures, and animals. The abundance of species present in organic farms offers the farm the stability and sustainability it needs to provide nutritious food.
All of the following factors amply demonstrate how beneficial organic farming has become. These are only a few of the areas that have seen the beneficial yet deserving effects of organic farming in recent years, including the economic, environmental, and nutritional ones.