5 Indian Chilies With (GI) That Are Known For Their Flavor 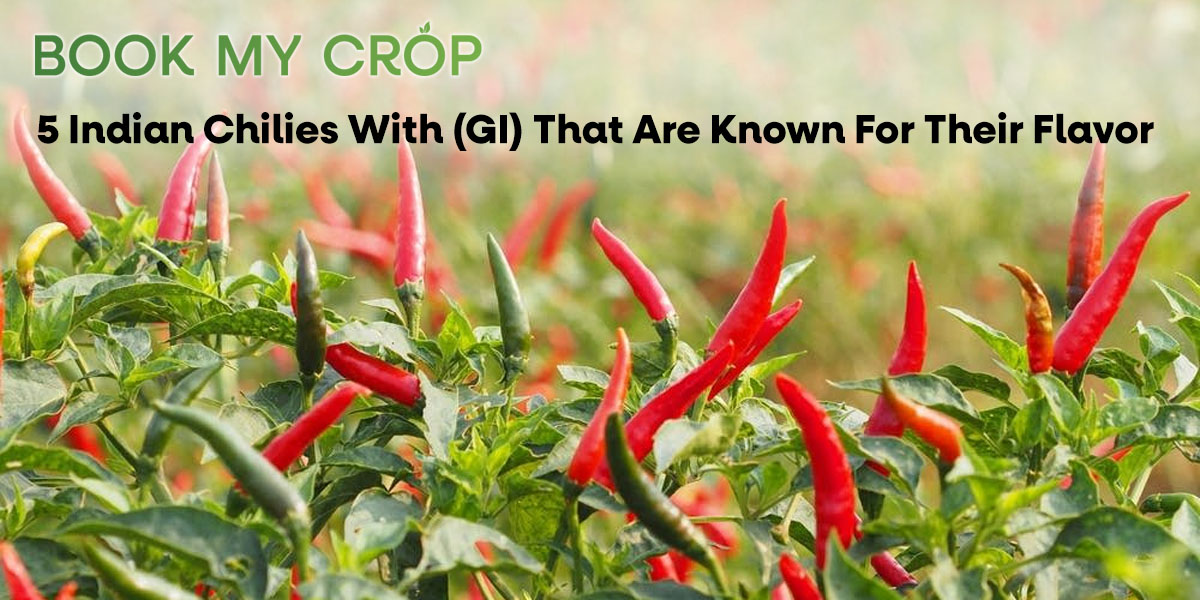 India presently generates 25% of the total chilli production in the globe. But did you realise that the humble chile isn't native to the United States? Here are 5 GI-tagged Indian chiles that are well-known for their flavor.

Most Asians, particularly Indians, have long been known for their high tolerance for spicy foods, particularly when chillies are used. Due to its abundance of chillies, Indian cuisine has certainly one of the highest spicy quotients of any cuisine. But did you realize that chiles aren't indigenous to this region?

Chilies, also known as 'Mirchi' in Indian languages, are a South American fruit that was first cultivated in Mexico around 3500 BC. It was said to be one of many objects that eventually made their way to the rest of the world after America's colonization in 1493.

Chili was introduced to India and other countries in the subcontinent by Portuguese traders some 400 years ago. Previously, black pepper from the area was used in Indian dishes. The introduction of chiles to this region and later to the rest of South India, was made possible by Vasco Da Gama's 16th-century trip to India via the beaches of Goa. Northern India took longer to include it into their diet and it wasn't until Maratha King Shivaji's army marched north to fight the Mughals that they were able to.

This unintended union of chiles and Indian cuisine is now closer to a match made in heaven. Chilies are known for their medicinal properties, which include aiding digestion, weight loss and heart health, as well as lowering allergies and relieving joint pain and migraines, among other things.

Here are some of the chilies you should try in Indian cuisine:

Bhut Jolokia
When it comes to heat, the ghost pepper, also known as Bhut Jolokia in Assam and widely produced and used in Northeast India, is a clear winner. It was named the world's hottest chilli pepper by Guinness World Records in 2007 and it's 170 times hotter than Tabasco sauce. The Scoville Heat Units (SHU) are a unit of heat measurement for chilli peppers and the bhut jolokia boasts nearly one million SHUs!

Khola Chilli
The Portuguese brought a promise of magnificent culinary fusion to the Goan shores and this is most likely where it all began. This vibrant red chilli is known for its flavour and capacity to add colour to meals and is cultivated on the steep slopes of Canacona, Goa.
It's found in almost every traditional Goan dish and it's especially well-known as a key ingredient in handcrafted condiments such as mango pickles and red chilli sauce.

Guntur Chilli
The Guntur chilli, which is revered in Andhra cuisine for its spiciness and flavour, is another variety. Although this chilli is primarily grown in Guntur, Madhya Pradesh has created a variety of varieties. The widespread use of the Guntur chilli in Andhra cuisines is indisputable, with the heightened spiciness known to bring tears of joy.
This is one of India's most popular chilli varieties, accounting for roughly 30% of all chilli exports.

Byadagi Chilli
Another South Indian culinary gem, the Byadagi chilli from Karnataka is a must-try if you prefer your chilies to be colourful rather than spicy. It is a staple of Udupi cuisine and is called after Bydagi, a town in Karnataka's Haveri region.
This crinkly chilli has a colour and flavour similar to paprika, and it's the best chilli to match with the Guntur chilli for cooking Mangalorean cuisine.

Bird’s Eye Chilli
This small chile, which is found in parts of Northeast India, packs a lot of heat, making it one of India's spiciest chilli kinds. This chilli is known as Thai chilies in other parts of Southeast Asia and it is used not only in cooking but also in the preparation of pickles and chutneys.
A word of caution only taste half a scoop of any chutney or pickle made with this chilli at a time. If you haven't yet mastered your spice threshold, this is one to relish in little quantities.

India is one of the world's largest producers and exporters of dried, raw and powdered chillies, thanks to its enthusiasm for spices. Andhra Pradesh is India's leading producer of chilies, accounting for 25% of global production, followed by Maharashtra, Karnataka, Gujarat and Tamil Nadu.