Government Schemes and Offers to Farmers for Agriculture 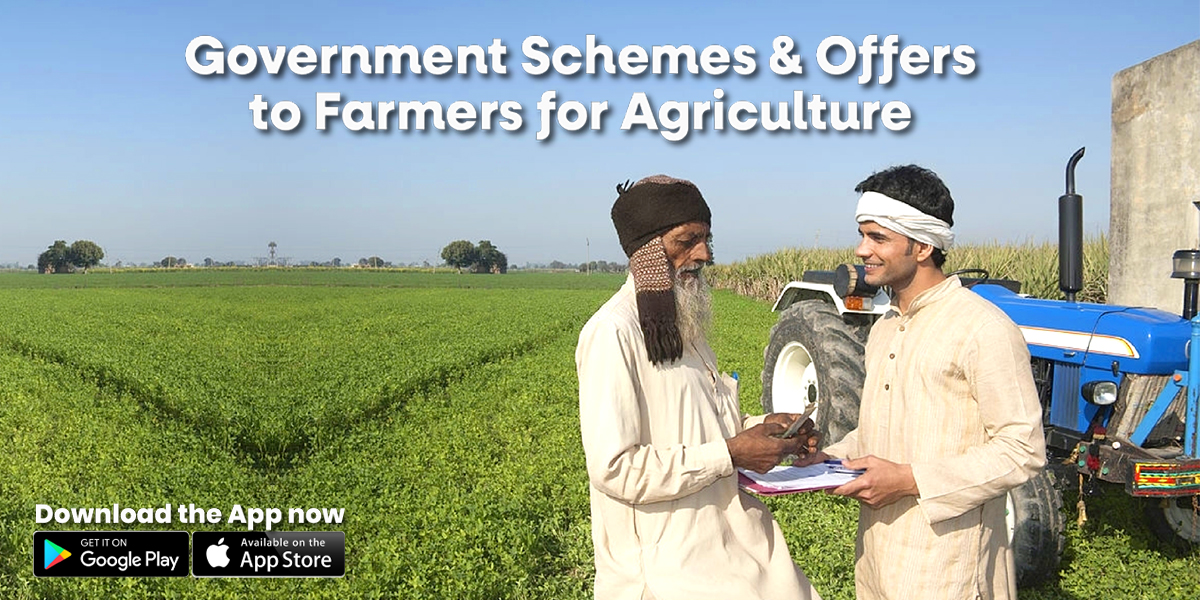 The welfare of farmers has been the Government of India's primary focus. It has undertaken many plans or yojana to revitalize the agriculture industry and improve farmers' economic conditions.

These agricultural plans are very advantageous to farmers, and they must be aware of them in order to benefit from them. So, in this article, we'll inform you about some of India's most useful and popular government initiatives for farmers.

Let's understand these schemes in brief;

The Pradhan Mantri Kisan Samman Nidhi Yojana is a government project that would provide up to Rs.6,000/- per year in basic income support to 120 million small and marginal farmers in India who own less than two hectares of land. The PM-Kisan plan has been running since December 1st, 2018. Under this scheme, the cultivators will receive an amount of Rs.6,000/- (3 installments of Rs.2,000/- each.)

Last September, Prime Minister Narendra Modi launched a pension system for India's small and marginal farmers. Under the PM Kisan Maandhan scheme, around 5 crores marginalized farmers will receive a monthly pension of Rs 3000 upon reaching the age of 60. Those between the ages of 18 and 40 will be eligible to apply for the initiative. Farmers would be expected to contribute to the Pension Fund on a monthly basis of Rs 55 to 200, depending on their age of admission, until they reach the retirement age of 60 years. The government will make an equivalent contribution of the same amount to the growers' pension fund.

The Pradhan Mantri Fasal Bima Yojana (PMFBY), which Prime Minister Narendra Modi announced on February 18, 2016, is a yield insurance programme for farmers. The Pradhan Mantri Fasal Bima Yojana is an actuarial premium-based scheme in which farmers pay a maximum premium of 2% for Kharif, 1.5 % for Rabi food and oilseed crops, and 5% for annual commercial or horticultural crops, with the remaining actuarial or bidded premium, split equally by the Central and State Governments. One significant goal of the system is to make it easier to settle claims quickly. The claims should be settled within two months of harvest, subject to timely receipt of both yield statistics and the state government's portion of premium subsidies.

(NOTE: MSPs for commodities such as paddy, cotton, jowar, bajra, maize, peanuts, and soybean have been raised by 4-5% over last year's rates)

The Kisan Loans Card scheme is another key government initiative that offers farmers timely access to credit. Kisan Loans Card scheme was created in 1998 to offer farmers short-term formal credit. The KCC plan was established to ensure that the credit needs of farmers in the agricultural, fishery, and animal husbandry sectors were addressed. Farmers are provided short-term loans under this scheme to help them buy equipment and cover other expenses.

The Paramparagat Krishi Vikas Yojana is being undertaken to improve organic farming in India. To improve soil health and organic matter content, as well as to increase the farmer's net income in order to acquire premium pricing. From 2015-16 to 2017-18, an area of 5 lakh acre is expected to be covered by 10,000 clusters of 50 acres each under the Paramparagat Krishi Vikas Yojana.

On July 1, 2015, the Pradhan Mantri Krishi Sinchai Yojana was launched with the motto ‘Har Khet Ko Paani' to deliver end-to-end solutions in the irrigation supply chain, including water sources, distribution networks, and farm-level applications. PMKSY focuses on generating sources of assured irrigation as well as protective irrigation by harvesting rainwater at the micro-level via ‘Jal Sanchay' and ‘Jal Sinchan.'

Nationwide Agriculture Market provides a national e-marketing platform and assistance in the development of infrastructure to facilitate e-marketing. This innovative market approach is transforming agricultural markets by ensuring improved price discovery. It also introduces openness and competition, allowing producers to receive better remuneration for their goods as the country moves toward ‘One Nation, One Market.'

In 2005-06, the Department of Animal Husbandry, Dairying, and Fisheries (DAHD&F) started a trial programme named the “Venture Capital Scheme for Dairy & Poultry.” The initiative aimed to expand support for the establishment of small dairy farms as well as other components to bring structural changes to the dairy sector. Later, the DAHD&F was renamed the 'Dairy Entrepreneurship Development Scheme' (DEDS), and the updated scheme went into force on September 1st, 2010.

As a sub-scheme of the Rashtriya Krishi Vikas Yojana, the Rainfed Area Development Programme was established (RKVY). The goal was to improve the quality of life for farmers, particularly small and marginal farmers, by providing a comprehensive package of activities to maximize farm returns. It also contributes to increasing agricultural productivity in rainfed areas in a sustainable manner by using appropriate farming system-based practices. It reduces the negative impact of crop failure due to drought, flood, or uneven rainfall distribution by employing a diverse and composite farming method. The initiative also assists in raising farmer income and providing livelihood support to reduce poverty in rainfed areas.

One of the eight Missions within the National Action Plan on Climate Change is the National Mission for Sustainable Agriculture (NAPCC). Its goal is to promote sustainable agriculture through climate change adaptation methods, increase agriculture productivity, particularly in rainfed areas, by focusing on integrated farming, soil health management, and resource conservation.

The Livestock Insurance Scheme aims to provide farmers and cattle rearers with a protection mechanism against the loss of animals due to death. The initiative also informs dairy producers about the benefits of livestock insurance and popularizes it, with the ultimate goal of achieving a qualitative improvement in livestock and their products.