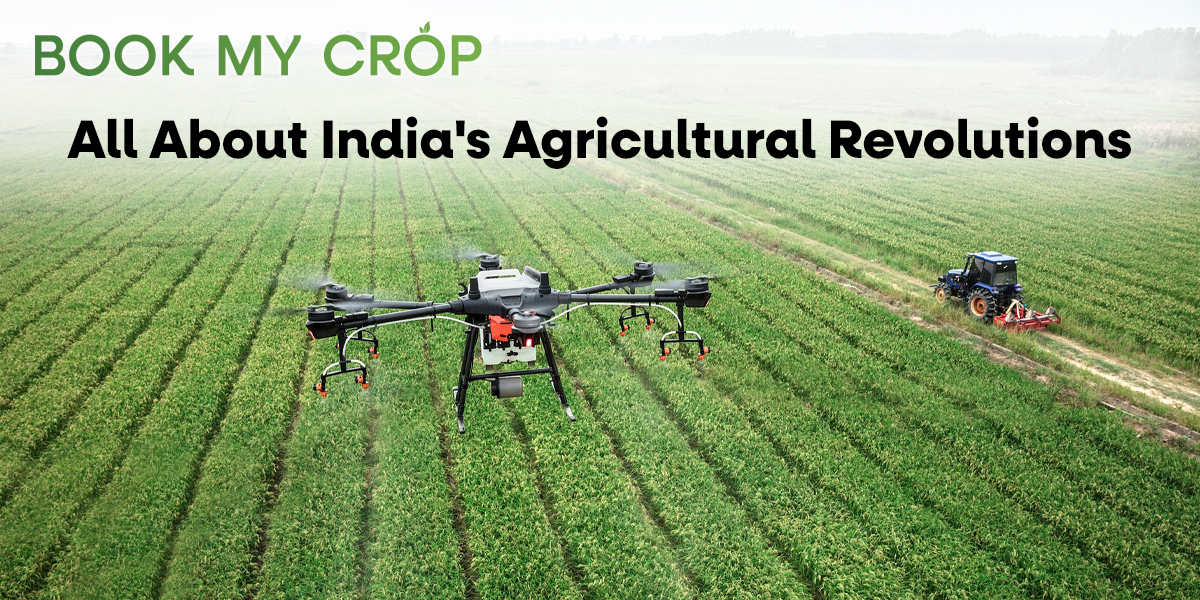 India is a developing country with developing brains and strategies that displace outdated beliefs to make room for novel and innovative concepts. This is also true of the agriculture sector. Every time there have been breakthroughs, discoveries, or the application of new technology, we have seen a revolution or change in the industries based on agriculture. Here, we'll discuss a few of the most significant revolutions that occurred in this area and their effects.

Green Revolution
The term "green revolution" was first used by M.S. Swaminathan in the 1960s to describe the transformation of Indian agriculture into a modern one through the use of higher yielding variety seeds (HYV), mechanized agricultural equipment, irrigation systems, herbicides, and fertilizers. It concentrated on the increase in food crop production, particularly wheat.

Protein Revolution
In 2014, with the start of this revolution, Narendra Modi and Arun Jaitley coined the phrase "protein revolution." The government also refers to this revolution as the second technologically-driven green revolution with a focus on increased productivity. The farmers were encouraged to use scientific farming techniques to boost the productivity of their land and the quality of their food grain products.

Yellow Revolution
Sam Pitroda, commonly known as the father of the Indian yellow revolution, started this revolt in 1986–1987. To achieve self-sufficiency, this revolution aimed to expand the production of edible oil, particularly from sesame and mustard seeds. Other targeted oil seeds include groundnut, mustard, soybean, safflower, sunflower, linseed, and castor.

Blue Revolution
The Blue Revolution, also known as Neel or Nili Kranti Mission, was started in the late 1990s (1985-90) To double farmers income, the primary goal was to establish, maintain, and promote fisheries. Drs. Arun Krishnan and Hiralal Chaudhary started this government-based programme.

Golden Revolution
The golden revolution was started by Nirpakh Tutej in 1991 and initially aimed to improve horticulture and honey production. It is regarded as a component of India's significant agricultural revolution, which helped the country become a global leader in the production of fruits like bananas and mangoes.

Red Revolution
The red revolution, an agricultural reform in India in the 1980s headed by Vishal Tewari, led to an increase in the production of tomatoes.
The country's economy has benefited from the red revolution in agriculture, which is also a significant source of income for farmers.

White Revolution
On January 13, 1970, Padma Vibhushan Dr. Verghese Kurien launched the milk revolution in India with the goal of making the nation one of the top producers of milk in the world. The "White Revolution," which aspired to make India a self-sufficient nation in milk production, was inspired by the Operation Flood initiative.
Currently, India is the world's greatest milk producer, and Dr. Verghese Kurien is credited with starting India's "white revolution."

Purple Revolution
The CSIR Aroma Mission, which tries to increase lavender growth in Jammu & Kashmir, was the mechanism through which the Union Ministry of Science & Technology launched the purple or "Lavender Revolution." In an effort to assist farmers in switching to more profitable crops, lavender cultivation was established in Jammu and Kashmir in 2007. This experiment is currently producing revolutionary results.
By having an effect on the growth and increase in various farm products, these revolutions have established a foundation in India's agricultural sector.
As a result, India is a developing country that isn't afraid to create innovative methods for improving outcomes in its largest sector, agriculture!