All You Need to Know About Sugarcane Farming, From Planting to Cultivation 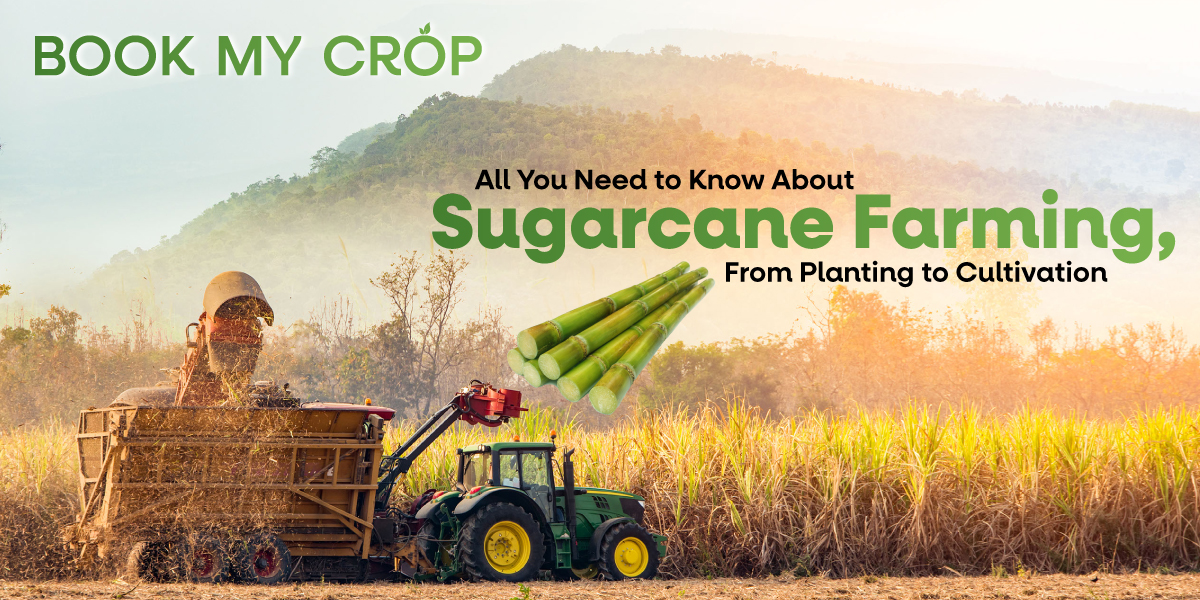 Sugarcane is one of the world's most extensively produced commercial crops. Although producing sugarcane does not involve much effort, you must be cautious and handle everything correctly because this crop is highly susceptible to climatic conditions, manure, fertilisers, soil type, irrigation method, pests and other factors.
India is the world's largest sugar consumer and after Brazil, the world's second-largest sugar producer. Sugarcane is grown by about 2.8 lakh farmers in India on 4.4 million acres of land. More than 11 crore Indians are directly or indirectly dependent on the sugar business. As a result, sugarcane farming in India is a significant crop for farmers to plant; therefore, let's go over it in further depth.

Sugarcane Farming Requirements for Agroclimatic Conditions
Sugarcane is a perennial grass crop that thrives in tropical and subtropical climates with temperature ranging from 20 to 45 °C. Also, this crop does well in intense sunlight (particularly long-period) and high humidity levels. This crop requires moderate rainfall – 1500 mm to 2500 mm per year for optimal development and output. Sugarcane can now be grown all year if certain irrigation parameters are met.

The Land Preparation
Sugarcane growing requires deep tillage, which is made of moulding board plastic; farmers without tractors can use wood-based Sarkar tin. Because the plant requires water, Cannes are typically grown in moist fields with a row width of 3-5 feet. Tillage can be prepared in two ways, which are explained below.

Ploughing
It is the traditional way of tillage preparation. Farmers fill the soil and tilt it, then sprinkle it with tractor-driven discs or triumph plough at a depth of 50-60 centimetres at least two to four times.

Harrowing
Harrowing is another tillage practise that uses pullovers to smooth and compact the soil in order to preserve humidity. This procedure entails digging only 12 to 15 centimetres deep.

Important Requirements
Climate
Sugarcane may be grown for a lengthy period of time and can thrive in hot, humid circumstances (unless terminated by flowering). Temperatures above 50°C halt growth, temperatures below 20°C limit growth and severe frost kills the plant.

Soil
Sugarcane thrives in medium-to-heavy soils. It can also be cultivated on lighter soils with enough irrigation and on hard clays with proper drainage.

Harvest and Growth
Planting
Sugarcane is propagated either vegetatively or clonally to achieve consistent cultivar traits. The most expensive method is usually planting. Stalk sections, also known as billets, setts, or seed pieces with one or more buds, are usually planted in late summer and root and mature into a stand in the winter. The roots plants are more prone to predation and decay at this time, so farmers should spray them with insecticide and fungicide before putting them in the seedbed.

Treatment Of Seeds
It's critical to use high-quality cane seeds from a nursery crop that's been in the ground for 10-11 months to ensure improved germination and growth. 2.5 % Urea, 2.5% KCI, 1% Hadron and 0.05% Bavistin can all be used in the seed treatment. After treating the seeds with the chemicals stated earlier, farmers can utilise two budded setts. In order to avoid seed-borne illnesses, a hot water treatment can also be applied.

Sowing
Sugarcane is often planted in the spring and autumn. 10-12.5 thousand three-eye budded can setts will be required to cover a one-acre area of ground.

Growing
Sugarcane can take nine to twenty-four months to mature to the point where it can be harvested, depending on the region's climatic circumstances. The original crop is only harvested once, followed by three to four ratoon or re-growth harvests. The crop requires drip irrigation in locations where annual rainfall is less than 1500 millimetres.

Ripening
Ripening can take up to three months; during this time, the stalk dries out, which speeds up sugar synthesis and storage. Ripening is best done during a cool, dry season. Simple sugars like fructose are often transformed to sucrose during ripening.

Harvest
A cane harvester is used by farmers to chop down entire stalks into smaller portions. A cane haul out follows the harvester, collecting the billets.
Sugarcane is one of India's most important commercial crops. It is planted on 3.93 million hectares, and India produces 170 million tonnes of sugarcane each year. Sugarcane productivity in India is roughly 67 t/ha. It is one of the most widely grown food-for-cash crops in the country, and it employs a large number of people.