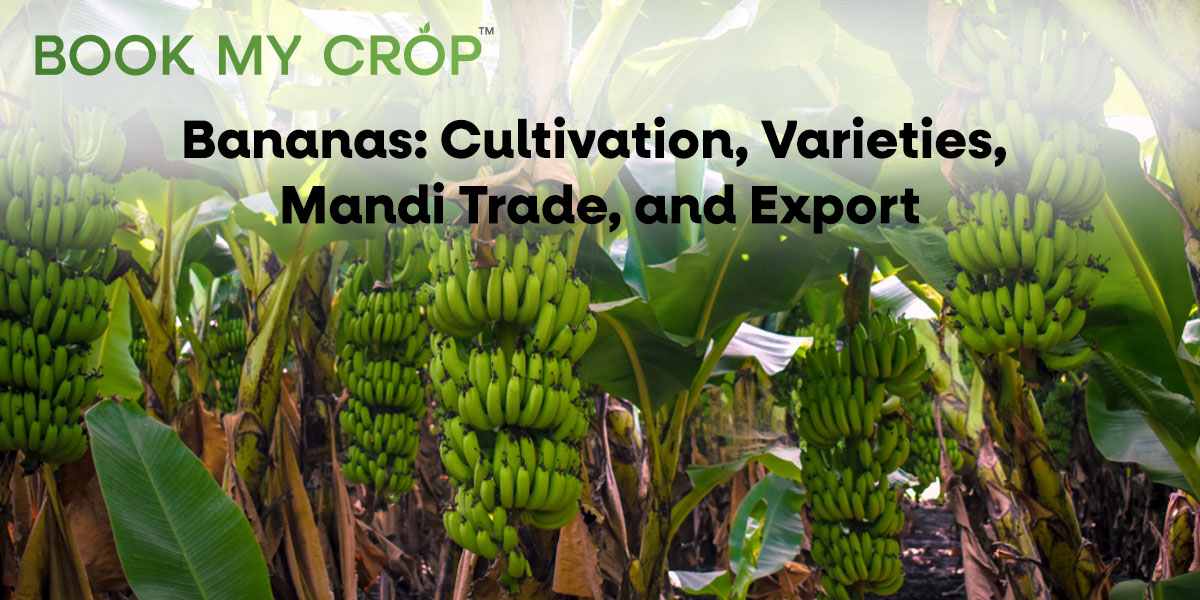 One of the fruits that is most important for excellent health is the banana. These are well-known both domestically and globally. Bananas are a favourite food all around the world because they are nutrient-rich. When it comes to its mandi trade, dealers in the Indian mandis buy and sell bananas on a massive scale.

Indian Banana Production
One of the world's top producers of bananas is India. 25% of the world's banana production comes from there. The majority of the nation's bananas are produced in Andhra Pradesh, Gujarat, Tamil Nadu, Maharashtra, Kerala, Uttar Pradesh, Bihar, and Madhya Pradesh, making up roughly 70% of the total. Since 2005, India has produced an increasing amount of bananas. While India's overall production peaked at 20 million metric tones in 2006, it reached the 30-million-ton mark in 2017. The states of Andhra Pradesh, Tamil Nadu, Maharashtra, and Karnataka make important contributions to the nation's production of bananas. With a share of 16.27%, Andhra Pradesh is the state that produces the most bananas. With shares of 14% and 13%, respectively, Gujarat and Maharashtra are the second and third-largest producers of bananas.

Worldwide cultivation of bananas
Philippines, China, Ecuador, Brazil, and Indonesia are the top banana-producing nations in the world. Over the previous ten years, India and China have produced more than 40% of the world's total bananas, making them the two biggest producers. While the majority of the bananas grown in China and India are consumed locally, the Philippines also exports bananas to other markets. With a 9% yearly growth rate, Ecuador is among the top five exporters of bananas worldwide. The other major banana exporters are Costa Rica, Philippines, and Indonesia.

India's Season for Bananas
About 120 countries around the world grow bananas in warm tropical climates. In India, the season lasts the entire year. Arrivals of bananas begin to rise in April and peak between August and October. 20% of the total area is used for farming in India. The prime harvesting season for bananas is from September to April, and the crop is typically ready for harvest 12 to 15 months after sowing. The season lasts all year in Maharashtra, Tamil Nadu, Andhra Pradesh, Karnataka, Manipur, Assam, and Tripura. The harvesting season begins in other states like Gujarat, Bihar, Uttar Pradesh, and Jharkhand in September and lasts till November. Bananas are purchased and maintained in cold storage for the mandi trade.

Indian Banana Varieties
There are about 300 different varieties of bananas grown worldwide. As opposed to India, where commercial banana cultivation is limited to 15 to 20 cultivars.

Little Cavendish:
It is the primary commercial type grown in Maharashtra, Bihar, Gujarat, and West Bengal for consumption and processing. Additionally, it is grown in Tamil Nadu, Andhra Pradesh, and Karnataka. One of the most widely grown commercial Indian banana types is called "Basrai." In Maharashtra, it is also among the most popular varieties of banana.

Robusta:
In Tamil Nadu and some areas of Karnataka, bananas of this kind are mostly grown for table consumption. In India, one of the most common table types of bananas is the Robusta.

Red Banana:
In Tamil Nadu, this is one of the most widely consumed banana kinds. Kanyakumari and Tirunelveli in Tamil Nadu and Kerala, respectively, are the commercial growing regions for it. In addition to western and central India, red bananas are also well-liked in Karnataka and Andhra Pradesh. It is referred to as "Lal Velchi" in Bihar and other regions of the nation and "Chandra Bale" in Karnataka.

Grand Nine:
The banana variety known as "Grand Nine" is a well-known international variety when compared to other Cavendish variants. Israel is where the "Grand Nine" cultivar is imported from.\

Poovan:
In Andhra Pradesh, it is one of the most popular commercial banana cultivars. Its ecotypes include Palayankodan in Kerala, Karpura Chakkarkeli in Andhra Pradesh, Poovan in Tamil Nadu, and Alpan in the north-eastern part of the country. Poovan is a widely grown commercial cultivar in India.

Nendran:
It is one of the common banana kinds grown in Kerala. It serves both processing and table needs. Nendran is currently employed in Tamil Nadu for commercial purposes as well.

Ney Poovan:
The most delicate kind cultivated in Tamil Nadu and Karnataka for commerce. Kerala is currently cultivating it intensively.

Indian commercial banana varieties
In India, bananas of many varieties are produced. However, only a small number of types are used for processing, with the remainder being consumed domestically. Bananas are divided into puree and sweetener categories in the commercial industry. Dwarf Cavendish, Robusta, Poovan, Nendran, Red Banana, Ardharpuri, Ney Poovan, and Rusthali are the commercial banana cultivars grown in India.

Banana Export
Indian bananas are highly sought after worldwide because of their delicious flavor. Iran, UAE, Iraq, and Oman are among the nations that import bananas from India. Banana exports from India have increased in both volume and value. 1.34 lakh metric tones of Indian bananas were exported in the period 2018–19, according to government statistics. It cost 413 crore rupees. India shipped 1.95 lakh metric tones of bananas worth Rs. 660 crore as exports rose in 2019–20 as well.