Farming Pesticides: Their Use, Benefits, and Importance 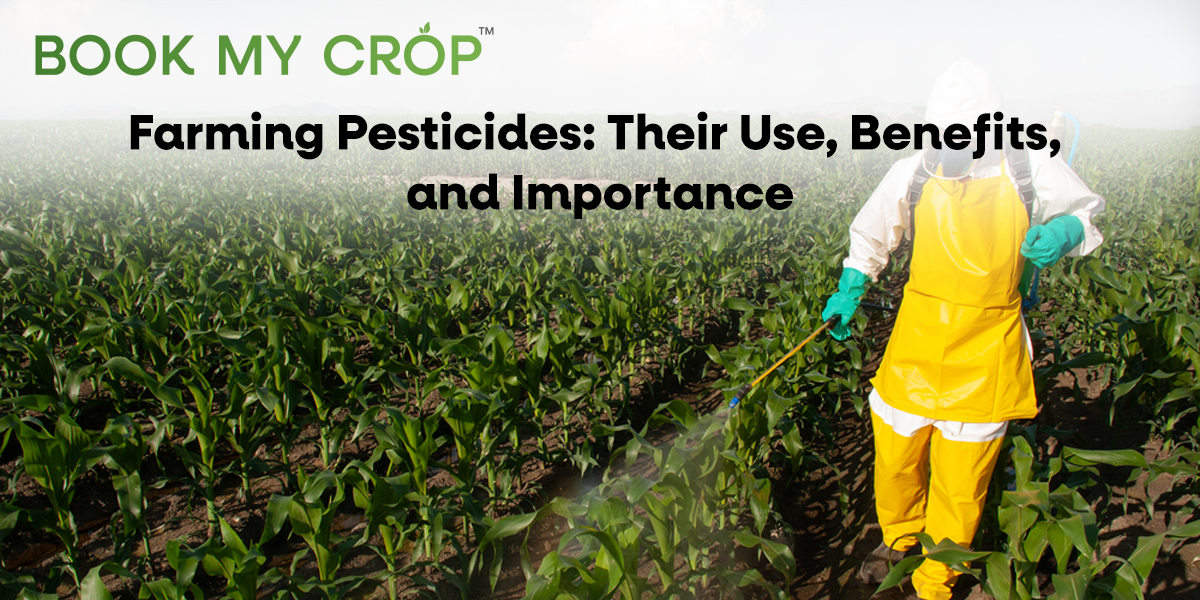 Do you know that there are 30,000 different types of weeds that can inhibit crop growth and that up to 40% of crops are damaged by pests, weeds, and illnesses brought on by them? In addition, 10,000 different bug species can ruin a crop since they devour plants. If we don't take action on the crops right away, these numbers could rise. However, there is no need to be concerned because a variety of pesticides are now accessible that kill pests, prevent their reproduction, and shield crops from harm.

Since not applying pesticides might result in farmers wasting resources like money, time, and effort, employing them is a requirement rather than an option. More crop loss also means reduced food sufficiency, and 795 million people worldwide lack sufficient food to survive. Consequently, employing a pesticide is not at all an option.

In addition, if you are sold on the concept of applying pesticides, let's look at the varieties of pesticides, their advantages, and what you need to buy below. We will also assist you in changing to different organic pesticides.

How do pesticides work?
A pesticide is a chemical-based compound used to fight off, manage, and kill pests animals or plants. They use a variety of biological agents to control agricultural pests that might harm crops and livestock, such as disinfectants, antimicrobials, bacteria, and viruses. As opposed to fungus, rodents, slugs, insects, weeds, snails, bird mites, etc., pests can also include any of these.

What are pesticides advantages?
The best invention for saving farmers labor and tough productivity is pesticide technology. Additionally, they support agricultural and land protection against native plants or organisms that would otherwise leech every nutrient from crops.
Pesticides aid in the management of pests that can spread diseases to plants.
It does not stop the growth of organisms that can harm people or cattle.
It aids in the management of organisms that pose a threat to human buildings and activities.

Let's go into more detail about the advantages of the many types of pesticides used in agriculture.

1. Increased production with less land
In order to cultivate more crops on their land, farmers have started using pesticides, which has resulted in a 20–50% productivity gain. Additionally, pesticides assist farmers in maximizing the advantages of inputs like premium seeds, equipment, fertilizers, nutrients, and other water sources. Additionally, insecticides support the cultivation of high-quality crops on sparse and limited grounds.

2. Eliminate diseases spread by insects and waterborne transmission
Since pesticides eradicate all types of pests from crops, land, and soil, dangerous waterborne or insect-borne diseases are no longer a threat.

3. Pesticides protect the environment
Pesticides enable more crops to be grown on a given piece of land with less ploughing, preventing soil erosion, deforestation, and the depletion of natural resources. Additionally, it aids in the control of noxious plant and weed species.

4. Assisting nations in becoming breadbasket
Farmers are able to plant 2-3 crops per year because to crop protection inputs like pesticides, which enables them act as a breadbasket for nations with shorter agricultural output or growing seasons.

5. Preserves unsold crops
Pesticides are used in areas other than merely agricultural land. When the harvests are gathered and put into storage, the farmers can use them. The kind of insecticides used also prolongs the shelf life of the crop stored and prevents post-harvest losses.

We also know that pesticides increase farm productivity, so let's move on to the different kinds of pesticides that farmers commonly use in agriculture.

8 Various Pesticide Types Frequently Used in Agriculture
Depending on their use or the kind of pests they are intended to control, pesticides can be divided into many classes. Let's talk about the kind and brand names of pesticides:

Herbicides
Herbicides stop the growth of weeds that can rob crops of the nutrients they need to grow. Furthermore, among the chemicals used as herbicides in agriculture are 2,4-D, Clethodim, Glyphosate, Bentazon, and Clethodim.

Insecticides
Insecticides, as the name implies, target the nervous system of insects to prevent them from inhibiting or reproducing.
Among the chemicals used as insecticides include organophosphate, carbamates, nicotinoids, fumigants, and biological.

Fungicides
Fungicides help in totally removing fungi by preventing their growth. Additionally, they quickly decompose in soil with air present.
A few forms of insecticides that are also employed as fungicides include maneb, nabam, and cycloheximide.

Rodenticides
They are chemicals that are used to keep rodent populations under control, including fish, birds, and mammals that can damage crops as well as rats, mice, and gophers.
Additionally, a few examples of rodenticides include chlorophacinone, diphacinone, brodifacoum, and bromadiolone.

Larvicides
Larvicides are pesticides that prevent vector-borne illnesses like malaria by limiting or controlling mosquito larvae or breeding.

Molluscicides
pesticides that typically prevent mollusks like snails, slugs, and others from living in an area or from spreading there.

Bactericides
Pesticides eradicate hazardous microorganisms from crops and livestock or prevent their spread.

Algaecides
For increased crop output, these herbicides destroy algae or prevent their growth.
Now that we have a list of pesticides and their applications, let's explore the persistent and biodegradable pesticide categories.

Do pesticides degrade naturally?
There is a pesticide that is both persistent and biodegradable.

To protect crops and harvests from harmful chemicals, many farmers and individuals favor using organic pesticides.

Organic pesticides: What Are They?
Pesticides classified as organic come from natural sources like plants and minerals. They still contain some chemicals, but they pose less of a concern than pesticides that only contain chemicals.

The different kinds of organic or biopesticides
Pesticides classified as organic or natural may be microbiological, botanical, mineral-based, or biochemical in nature.

Microbial Pesticides
Agents made from fungi, algae, bacteria, natural protozoans, or viruses are referred to as microbial pesticides. Additionally, by dispersing a poison and infecting the insect population, these pesticides reduce the amount of insects produced.

Biochemical Pesticides
Both synthetic and natural sources can be used to create biochemical insecticides. They can also prevent insects from reproducing and limit their abundance.

Mineral pesticides
Sulfur and lime-sulfur are two examples of mineral insecticides that prevent the growth and inhabitation of common insect pests.

Are organic pesticides more effective than chemical ones?
Chemical-based pesticides have the potential to degrade soil quality and crops' nutritional value when used in large quantities. Organic pesticides come into play as a result because they are derived from nature and do contain chemicals, but they are not detrimental to the environment when used properly.