India does require agrarian reform, but it must be pro-people rather than pro-corporate. 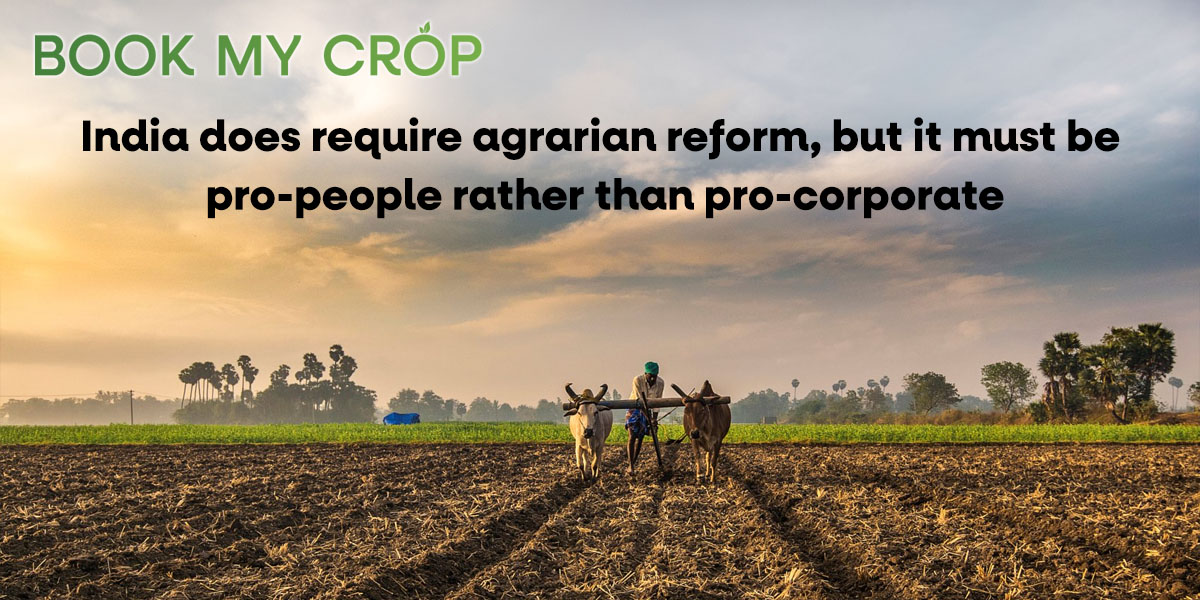 Since the Government of India adopted the 'New Economic Policies' of liberalisation, privatisation, and globalisation in 1991, there has been a tremendous emphasis on'reform' in many areas of the country's economy.

Attempts have been made and continue to be made, to educate residents about the importance of economic growth in India for the common good, which can only be achieved through pro-corporate / capitalist policies. The 'Trickle Down Theory' allows increased earnings to be passed on to the general populace.

Over the last 32 years, corporate / capitalist ownership of the country's resources has risen enormously. The 'Trickle Down Theory,' on the other hand, has failed horribly, resulting in a growing economic divide between the rich and the poor.

India's rulers and high-ranking officials have been making a series of pronouncements about the design and implementation of new policies on 'agrarian reforms' for quite some time.

They've been attempting to persuade people that agriculture can only be transformed through these policies. However, the type of 'agricultural reforms' that have been and are now being discussed in the country are pro-corporate and capitalist.

Reform with stipulations
Reforms in the agricultural sector are unquestionably required. People can survive without automobiles, bungalows, aircraft, costly phones and other luxury stuff, as the COVID-19 pandemic has demonstrated. However, they require bread, which can only be provided by the agricultural sector.

Bread, clothing, housing, education, healthcare, a clean environment and social security are among the seven basic essentials of life that must be addressed by agricultural reforms in order to ensure the survival of human life.

Economic conditions deteriorate as one scales down from large farmers to medium, semi-medium, small, marginal and landless farmers, according to many research studies undertaken in India.

Most farmers (with the exception of the large ones) are in debt to the point where they can't even pay the interest on their debt since they're forced to take out new loans to keep their stoves running for merely two square meals per day.

Agricultural labourers and rural craftsmen are two poles at the bottom of the agrarian economy ladder, although having significantly less debt than farmers.

These groups have no other option for income than to sell their labour. From the 1960s onwards, the rapid expansion in the use of machines and herbicides to alleviate the country's severe food shortages has resulted in a significant reduction in the number of days that agricultural labourers and rural craftsmen are employed in the agricultural sector.

In India, the feudal system has been abandoned for a long period. Most farmers, however, still believe in feudalism, with landless agricultural labourers and rural craftsmen bearing the brunt of this belief.

So, what are the options?
In order to boost farmers income, the minimum support price (MSP) must be made lucrative. As land ownership grows, the benefits of such prices will grow.

As a result, the current loss-making agriculture will become profitable. However, in addition to profitable MSPs, landless, marginal, small, semi-medium and medium farmers must be offered preferred subsidies / grants to boost their revenue.

To boost the income of these populations by assuring employment under MGNREGA and extending the working days of all able workers according to their needs, MGNREGA salary rates should be at least equal to minimum wages set by various governments. Other job-creating schemes/programs can make a substantial impact.

Except for the huge population, interest-free loans must be made available to meet the financial needs of all peasant classes, agricultural labourers and rural artisans. This will assist them in lowering their interest expense.

Not only would this boost jobs, but it will also assist these parts by adding value. In a 2011 assessment, the United Nations concluded that family farming was the only method to provide food security for the world's inhabitants while also preventing global pollution.

The federal government and state governments must each contribute their fair share in this regard. This can be done on Panchayat / Shamlat lands at first. One-third of Panchayat/Shamlat lands should be handed to Dalits, one-third to women, and one-third to landless farmers for cooperative farming at no cost.

Governments and farmers organizations should also work to expand cooperative farming among farmers, which would lower production costs, boost production and increase net economic profits. At the same time, governments must contribute adequately to the cooperatives marketing efforts.

Governments should also ensure that all segments of the agriculture sector have access to high-quality education and healthcare. People that rely on the agricultural sector will become more conscious as a result of this.

Groundwater levels have dropped to unsafe levels as a result of imposing wheat and paddy crops in some areas, particularly Punjab, to address the country's serious food grain shortages in the 1960s through MSP and procurement policies.
The Union government should ensure that MSPs for kharif crops other than paddy are decided fairly and that government procurement is assured.

In order to safeguard the environment from pollution, special attention must be paid to preventing continued groundwater depletion, as well as limiting the use of chemical fertilizers, pesticides, insecticides, herbicides and conducting research into natural farming.

Agrarian reforms will only be worthwhile if they are able to solve the agriculture sector's challenges. Adopting a pro-people and environmentally friendly economic growth strategy rather than a pro-corporate / capitalist economic development paradigm will provide the necessary funds.