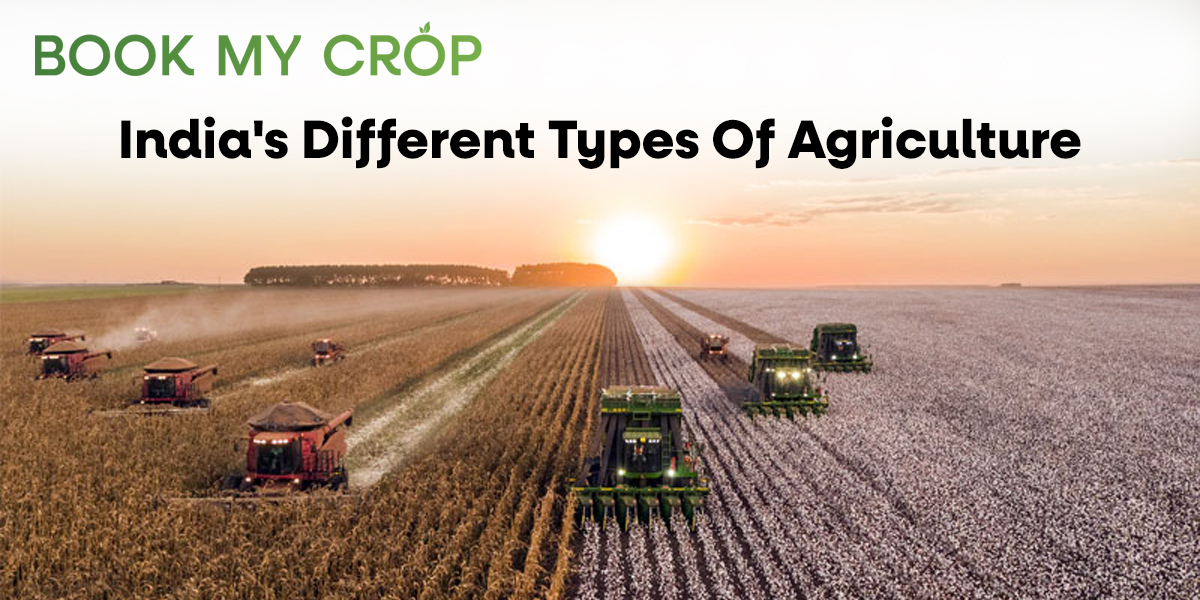 For the vast majority of Indians living in rural areas, agriculture is their main source of income.
Since agricultural operations are carried out throughout the entire country, it shows a stronger preference for and priority over the nation.
Farming is a vital activity that farmers perform. Farming tools and equipment are also taken into account when the word "farming" is used.

The type of agriculture that must be practised is greatly influenced by the seasons.

1. Subsistence Farming
The technique of cultivating purely for one's own consumption is known as subsistence farming. It involves using basic farm equipment to work on tiny agricultural plots. Most subsistence farmers are thought to be poor and unable to afford improved crops and fertilizers. The farm is consequently located on territory with poor soil fertility or difficult topography.
Irrigation and electricity, both of which are usually unavailable to these farmers, are not used in low-yielding subsistence farming. The farmer and his family consume practically all of the food produced, therefore very little of it is sold for a profit. Agriculture is expanding rapidly in the mid-latitudes.

2.Dry Farming
In areas with irrigation problems and low rainfall totals of less than 20 inches, a particular style of agriculture called as "dry farming" is employed. Winter wheat, corn, beans, sunflowers, and even watermelon can all be grown on dry land. Arid soil can be successfully cultivated with as little as 9 inches of yearly precipitation; higher rainfall expands the range of crops.

3. Mixed Farming
Growing plants and animals with the purpose of selling them for a profit is known as commercial farming. Despite the fact that the commercial economy has existed for thousands of years, considerable changes have taken place in the last century. Because of advances in science and technology, it is now possible to genetically engineer crops to develop a variety of resistance.

4. Pastoral Farming
Pastoral farming is one of the earliest forms of agriculture. Pastoral farming is the technique of raising just animals in environments that are too cold and humid for growing crops. These nutrition, steep slopes were created to promote mechanization rather than plant growth. These areas are usually suitable for grasses and weeds.
Crop damage in sloping terrain is more likely during rainstorms with strong winds and high water flow. Instead of dairy animals, sheep do better when grown on slopes. Sheep can consume grass and are tolerant of both dry and wet weather.

5. Sedentary Farming
Sedentary farming is the use of the same piece of land over an extended period of time. This, as opposed to nomadic farming. A single farmer engages in this type of farming without rotating the fields. This term was frequently used to describe ape farmers in equatorial Africa who continually farmed the same area of land rather than rotating or altering it.

6. Nomadic Farming
Cattle are frequently moved around in order to find new grazing land and water, a practise known as nomadic animal management. Depending on the region or culture, nomadic cattle can take on a wide variety of forms. Some human groups and societies are referred to as nomads because they have always been totally dependent on nomadic livestock.

7. Alternate Cultivation
In the tropics, shifting agriculture involves planting crops on forest land after clearing or burning the forest. Native Americans cultivate the soil on forest land until it becomes unproductive. It usually takes three to five years for the soil to lose its fertility or to be overtaken by the native vegetation. After the land loses its fertility, farmers go to the next forest and continue the process. Grain production in the tropics is the main purpose of this farming.

9. Mediterranean Farming
Mediterranean agriculture entails raising livestock and growing crops in the region's arid climate. Small animals and crops including citrus fruit, wheat, and vineyards are the principal agricultural products farmed in the area. Due to the winter rains, horticulture is also undertaken, with the majority of crops being sown in the winter.

10. Cooperative Farming
Everyone involved in this type of farming has a financial stake in the business. Other than the cooperative's members, who voluntarily pool their resources to manage the firm, there is no pressure. Every member is free to leave the society whenever they like and retain ownership of the resources and land they have set aside.
The amount of money that each member receives is determined by their individual portions of land, labour, and capital. Cooperative enhanced farming is one of the many classifications for this type of farming both ownership and operation separately.
Collaborative farming in a cooperative. Ownership is individual, but operations are conducted out jointly. Tenant farming cooperative Individual actions and group possession. Collaborative farming in cooperation jointly owning and operating the property.

11. Rotation of crops
One of the agricultural practises known as crop rotation involves varying the cultivation of crops on the same plot of land across several growing seasons. This method aids the soil in regaining its fertility and nutrients that were lost during the harvest of a previous crop.

12. Capitalist Farming
In capitalism-based farming, large businesses or capitalists invest both money and land. The workers who are employed are paid. Utilized are more advanced farming methods and intensive farming. Farms are typically mechanized. Employees are paid extra. The company's profit or loss is the responsibility of the investor or businessperson.