Is Platform-Based Aggregation The Solution For Small Farmers And Carbon Farming? 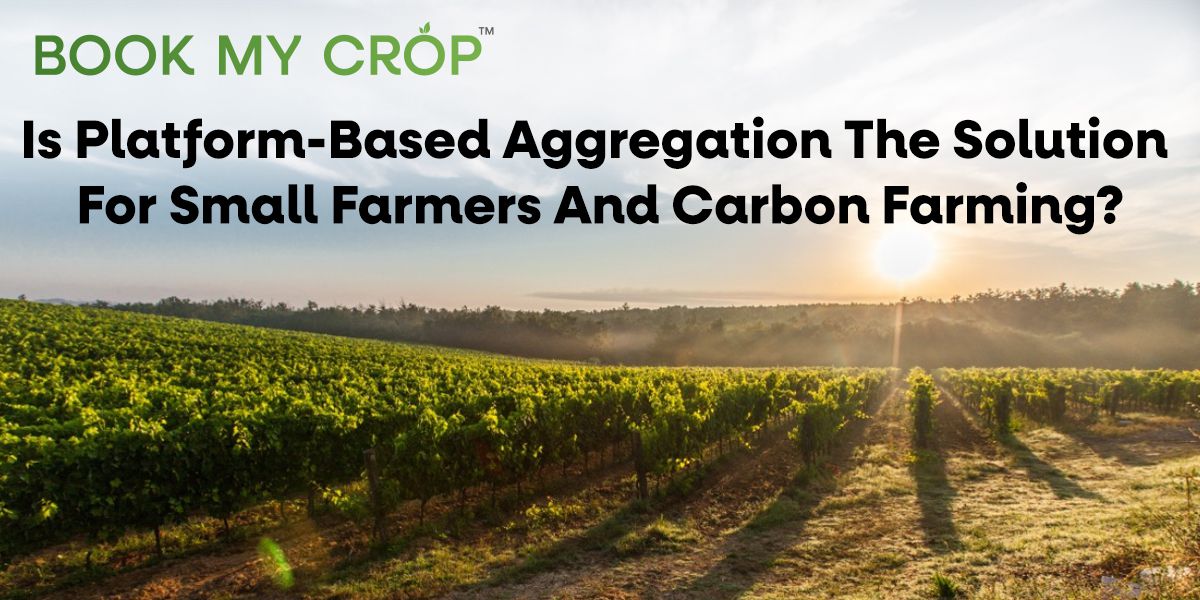 In 2050, it is expected that there will be close to 10 billion people on the planet. The demand on the agriculture industry and producers grows as the numbers rise. India, the world's second-largest producer of staple foods such grains, rice, wheat, groundnuts, fruits, and vegetables, is in charge of feeding the globe.

More than half of the world's 1.4 billion people are employed by this sector, which accounts for approximately 20% of the total GDP. It also provides the main source of income for roughly 70% of rural households. India depends heavily on agriculture, which is also the main source of carbon dioxide emissions. 11% of the global agricultural methane emissions are caused by rice farming alone. India is the third-largest producer of greenhouse gases, and 74% of its emissions come from methane produced by cattle and agriculture, along with another 17.5% of carbon emissions.

Businesses are also eager to offset their carbon emissions, which is driving up the price of carbon credits. According to the most current data, the spot price for Australian Carbon Credit Units (ACCUs) on the market has risen to an all-time high of $22.40 per tone of carbon dioxide that has been stored. This figure is increasing. Farms in Australia can earn credits by storing carbon in a variety of ways. It entails protecting existing native trees, adding carbon to the soil, and lowering the amount of methane produced by the herd. To ensure that every sold tone of carbon is stored, accurate measurements and accounting are performed for each.

India presented its five-point plan to address climate change at the COP26 summit. One million tones of carbon emissions were to be cut, the GDP's carbon intensity was to increase by 45% until 2030, and zero emissions were to be achieved by 2070, according to its pledges. While certain modern farming techniques can actually enhance the rate of carbon capture, traditional methods can have the opposite effect. In the context of carbon capture, common examples of beneficial agricultural techniques are improved hedgerows, tree planting, direct drilling or zero tilling, and cover crops. Agriculture is seen as the main contributor to climate change, but it is also a crucial part of the solution. Think about soil. Agriculture alone has the capacity to store up to 1.2 million tones of carbon if managed with the right methods and tools. As a result, throughout the remainder of this century, it might offset up to 4% of the typical yearly GHG emissions.

New opportunities for climate-friendly agriculture are opened up by sequestering carbon from soils. These include enhanced soils that require less fertilizer and produce healthier crops overall, increased farmer resilience and economic prosperity, and reduced greenhouse gas emissions. In order to restore the importance we place on healthy soils in light of the fact that 52% of farms worldwide are being lost or degraded, active interventions must be put in place.

Carbon credits to encourage sustainable practices
Carbon credits, which are verified carbon reductions from climate-friendly projects, are increasingly being utilized to support ethical corporate practises and advance the world's net-zero goals. The market for carbon credits, which is voluntary and is anticipated to be worth $1 billion by 2021, is therefore attractive to multinational corporations.

Although reforestation and renewable energy are the two projects that generate the majority of carbon credits, awareness of carbon farming is rising. By facilitating the production of carbon offsets from carbon sequestration and the trading of these offsets, these programmes aim to enhance the contribution of agriculture to climate mitigation. As an illustration, Microsoft has agreed to spend $2 million on carbon credits from a US agricultural cooperative. Additionally, US Vice President Biden has suggested establishing a "carbon bank" to compensate farmers for implementing regenerative farming practises. As a result, farmers have access to technology, information sources, mechanization, and equipment. The carbon credit system for agriculture has, up to this point, primarily been limited to large-scale farms in sophisticated economies.

The potential effects, however, might be enormous in the developing world, where there are millions of small-scale farmers. Therefore, in order to accelerate project scaling and advance sustainable production practises, a straightforward verification and validation mechanism for carbon credits must be developed.

India is working toward having no emissions of carbon.
India has committed to net-zero carbon emission reductions by the year 2070. Initiatives like reducing stubble burning, providing agriculturalists with technology, and other activities encouraging regenerative agriculture must continue to be the primary priority in order to achieve this. New technologies and digital connectivity are already working together, and carbon credits provide chances for farmers who benefit from climate-friendly agriculture and live longer lives as a result. Smallholder farmers can engage in the carbon markets that will benefit them and the environment, even if work still needs to be done to strengthen the verification of the carbon process by creating a customized and integrated approach.

What elements could make small-scale carbon-based farming more effective?
Automation and digitalization are the main solutions. Except for planting trees, every method used to estimate carbon storage must be carried out manually. In particular, soil carbon storage is a scientific process, and measures that dramatically improve soil carbon storage in one location may not be effective on another farm. However, there are methods for automatically calculating carbon storage. However, automation is expensive, and only big businesses can afford it. Automation does not, therefore, benefit the smaller farmer. The uptake would be greatly increased with a public software platform that could calculate the earnings from carbon credits, similar to a reverse-climate-footprint calculator.