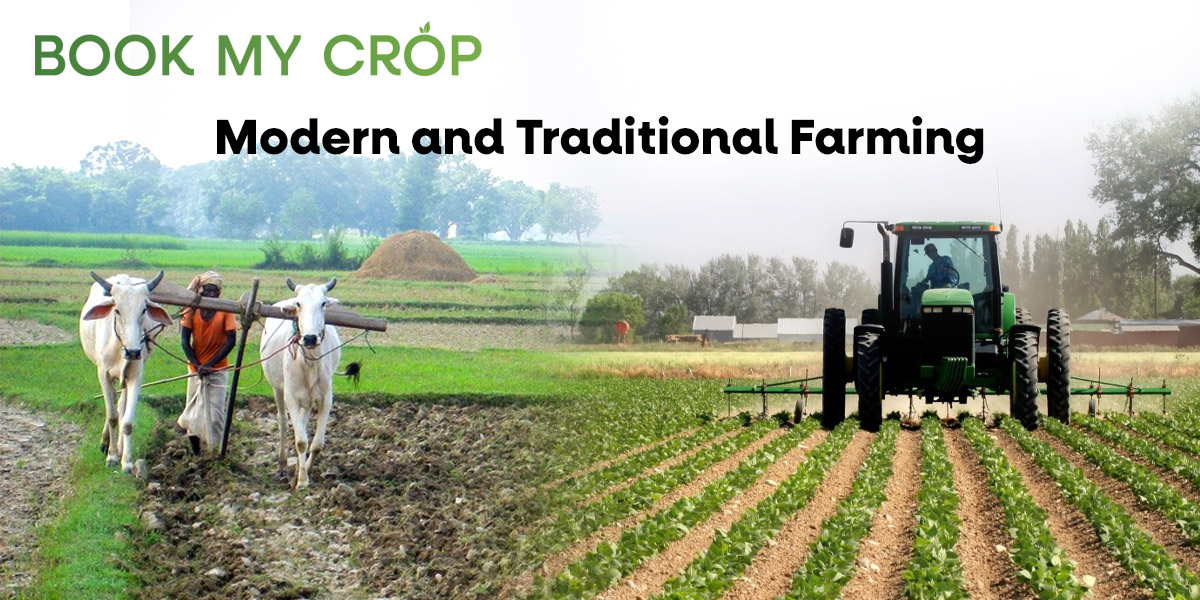 The best farming method is agriculture, which is regarded as the lifeblood of the nation. Before the invention of new techniques in farm machinery and agriculture, farmers continued to practise traditional methods of agriculture.

But in recent years, agricultural researchers, farmers, and the government have worked to strengthen the agrarian sector by empowering new agricultural techniques and technologies.

Farmers use a variety of tactics to focus on modern agriculture as India opens numerous doors to liberalisation and globalisation.

The agriculture system needs to be concentrated to boost crop output and give the country better food as a result of the rising global population.

Is conventional farming still appropriate in light of the fact that population increase is causing the environment to deteriorate so quickly?

Farmers used antiquated techniques and farming equipment in the past for the better operation of the farming system, but with less equipment and traditional methods, farming requires a lot more time and money to complete. Nevertheless, traditional farming is still practised today and is still very popular, allowing farmers to provide ecological and cultural services to humanity.

Let's talk about the traditional practises used in rural areas for farming now:

The ideal way to use crop rotation, which is the oldest agricultural strategy, is to produce various crops on the same plot of land during various seasons.

When two crops are sown at once, the practise is known as intercropping or mixed cropping. Intercropping is a technique used to increase a plot of land's productivity.

There are a number of farming methods that are employed under intercropping or mixed cropping. One of them is row cropping, also known as temporal cropping.

The oldest and most traditional farming practises date back to agroforestry.

Through the planting and upkeep of trees, this aids in the creation of microclimate and safeguards the crops. It is the ideal system of land use management for usage beneath crops. This technique can be used to obtain a variety of goods, including food, firewood, and wood.

The ancient method of water harvesting is used to gather rainfall and store it for later use in agriculture.

Through this approach, farm productivity and food security are boosted.

The polyculture method is employed to cultivate various plant species together. Without the use of chemicals, it is effective at controlling weeds, pests, and diseases.

Let's move on to the following farming system, modern farming. The finest strategy now used by farmers for the expansion of the agricultural system is modern agriculture farming.

Farmers accept various scientific innovations and techniques for the benefit of agriculture farming. The best method for enhancing crop variety, organic farming, sustainable agriculture, better irrigation systems, and many other aspects of agriculture is modern farming.

Let's move on to the cutting-edge farming methods that farmers in the agricultural industry use nowadays:

When growing one type of crop on a specific piece of land, the monoculture technique is used. Land farming becomes simple. The field is inclined similarly, and the crops that will be sown are sized equally, which explains the situation. As a result, farmers concentrate on the monoculture farming system.

This excessive tilling of the field is done to improve the soil aeration and increase farm produce. To ensure that farming systems are properly cultivated, intensive tillage is used.

In modern agriculture, there is a greater danger of encountering organisms like plant-eating insects and illnesses that stunt plant growth and animal development. Weeds can also hinder crop growth.

As a result, synthetic materials or sprays are available to defend against various pests and reduce insect outbreaks in agriculture. To take safety precautions, a variety of chemical sprays are offered on the market.

Water is a crucial resource for the agriculture system during cultivation. A better solution is to use a row irrigation system or to provide water to the fields at the proper level. Sprinklers, drip irrigation, and pumps are a few of the cutting-edge devices that aid in a healthy irrigation system.

Future farmers will be able to readily adapt current techniques and technologies to view agriculture in a better light.

Modern ways are being implemented, which benefits the nation's economy.

While using the natural resources like water, people, land, etc. that are already at hand. Although the farming operations require a lot of time and effort.