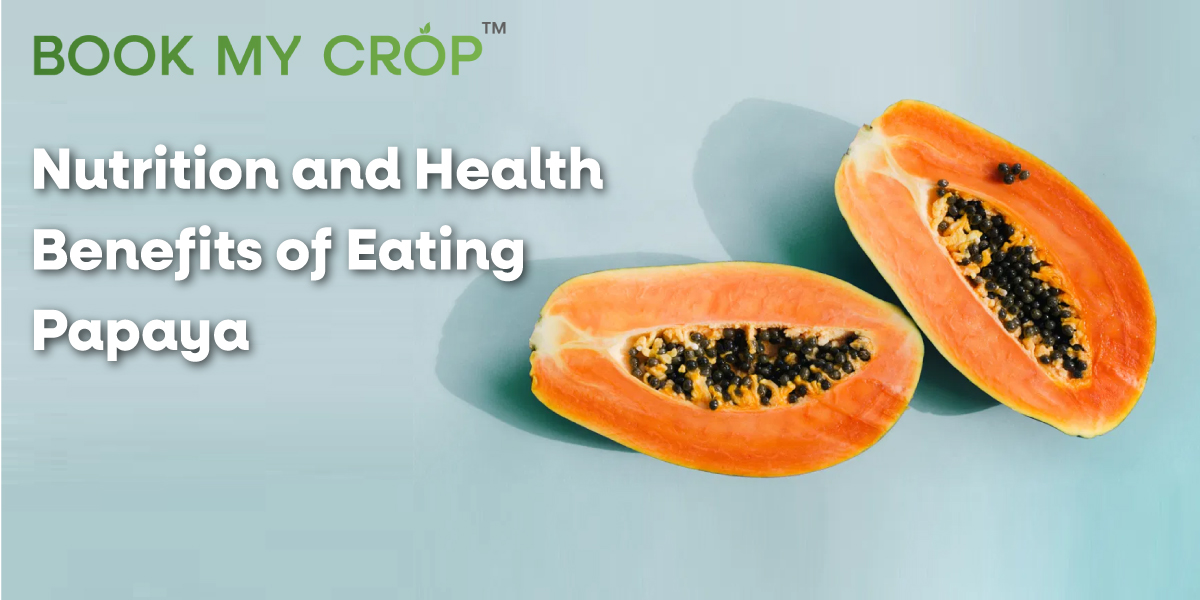 The orangish-green coloured fruit that is more frequently referred to as papaya is actually recognised by its scientific name, Carica papaya. It has a sweet flavour and a smooth texture, both of which are characteristics that many people find appealing. The seeds can be eaten as well, despite the fact that they have a more astringent flavour as compared to the fruit itself.

Papayas are believed to have originated in Central America. They are most successful when cultivated in a tropical environment that receives abundant rainfall but is not subject to persistent flooding. Freezing temperatures may destroy a papaya crop.

Papayas were both consumed by and utilised as medicine by the indigenous people who originally inhabited this region. In the 1500s and 1600s, conquerors from Spain and Portugal took the seeds with them and travelled to other tropical regions of the world, such as the Philippines and India. If you are looking to buy papaya online in India, look no further than Book My Crop, India’s most distinguished agri-tech startup.

The areas of the world that are currently the most productive producers of papaya are places like the Philippines, Hawaii, Australia, Ceylon, India, as well as tropical areas in Africa. There are still some smaller-scale papaya agricultural enterprises in both South as well as Central America.

In a grocery store, you could come across several different kinds of papaya, such as:

There are significant amounts of the antioxidant vitamins A, C, and E found in papayas. Antioxidant-rich foods may help lower the chance of developing cardiovascular disease. Oxidation of cholesterol is avoided due to the presence of antioxidants. When cholesterol oxidises, it increases the risk of blockages being formed, which poses a threat of getting heart disease. Eating Papaya will give you protection against many heart problems, to stay fit and keep your heart healthy, buy papaya online from Book My Crop today.

In addition, the high fibre content of papaya may help lessen the chance of developing heart disease. Diets that are high in fibre have been shown to reduce cholesterol levels.

The papaya fruit contains folic acid, which is necessary for the process of converting the homocysteine of amino acids into amino acids that are less toxic. A potential threat for cardiovascular disease is having high amounts of the amino acid homocysteine, which is most commonly found in items derived from meat. Having a diet that includes papaya may help in lowering the levels of homocysteine, thereby lessening the severity of this risk factor.

Papain and chymopapain are two of the enzymes that can be found in papaya fruit. Both enzymes are capable of breaking down proteins, which enables them to support digestion and alleviate inflammation. Some over-the-counter digestive remedies that can help with a minor upset stomach include papain as one of its active ingredients.

Both chymopapain, as well as papain, work together to bring down inflammation levels in the body. They have the potential to alleviate acute pain, such as that caused by burns or bruising, and they are also capable of assisting with chronic inflammatory disorders, such as asthma and arthritis.

Consuming foods rich in vitamin C has been shown to aid improve immune function, which in turn allows the body to better defend itself against bacterial and viral infections. Because it contains sufficient antioxidants, eating papaya can be part of a diet that is beneficial to the immune system.

Vitamin A is another essential vitamin for maintaining a strong immune system and proper function, and papaya is an excellent source of this nutrient.

The natural pigment lycopene is naturally present in food that is of either red or orange colour. Watermelon, Tomatoes, as well as Papaya, are all excellent food choices for getting your lycopene fix. Some industry professionals are of the opinion that increasing one's consumption of lycopene can help lower one's risk of developing prostate cancer; however, the results of some research have been equivocal.

In contrast, the consumption of a diet rich in lycopene in conjunction with drinking green tea was shown to greatly lower the chance of developing prostate cancer.

A papaya that is approximately the size of a medium-sized apple contains 200% more Vitamin C than is required on a daily basis, making it an excellent food for lowering the risk of heart disease and bolstering the immune system. Get the best nutrition from Papaya, buy papaya online in India from one of the excellent agri-tech startups, Book My Crop.

Papaya is rich in: