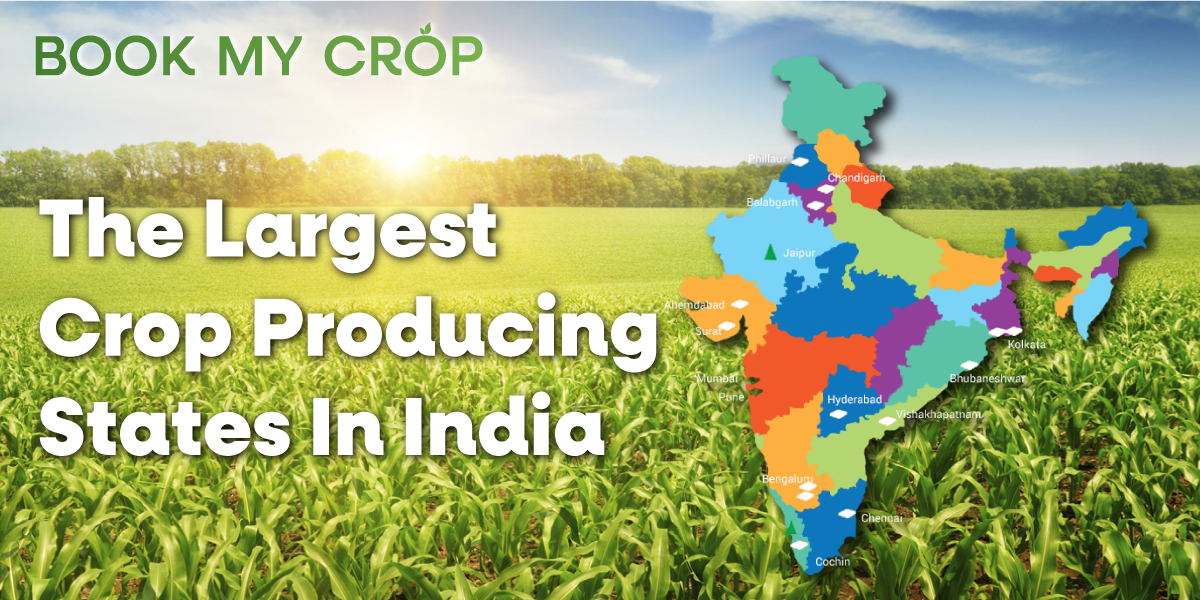 India has long been known for its robust agricultural industry, which employs more than half of the country's workforce. It also accounts for almost 17-18% of India's GDP, making it a vital sector of the economy.
India's grocery and food market has grown to become the world's sixth largest due to continued development and innovation. This ongoing progress in this industry is critical for our country, as agriculture is the primary source of income for over half of the people.
With that said, let us look at India's top contributing states. So, here is a list of India's top ten agricultural states.

West Bengal
West Bengal is India's biggest grain producer, particularly in rice. It produces almost 146.05 lakh tonnes of rice each year, yielding 2600 kilos per hectare. West Bengal is noted for producing spices such as chilli, ginger, garlic, coriander and turmeric, in addition to rice and jute.
While rice and jute output lead the way, crops like sesamum also contribute to West Bengal's ranking as one of India's top ten agricultural states. Other crops grown in West Bengal include mangoes, litchis, pineapples, guavas and oranges, as well as vegetables including cauliflower, tomato, cucumbers, cabbage, okra and brinjal. As a result, West Bengal is a major producer of almost all types of crops, making it India's leading agricultural state.

Uttar Pradesh
With an annual wheat yield of 22.5 million tonnes, Uttar Pradesh is India's biggest wheat-producing state. Uttar Pradesh's favourable meteorological conditions for wheat production inspire farmers to cultivate wheat on almost 96 lakh hectares of land each year, making it the state's largest wheat producer.
Wheat however, is not only to blame for Uttar Pradesh's position as India's premier agricultural state. Many crops, such as bajra, rice and sugarcane, have also played a significant role. Uttar Pradesh is recognised for its sugarcane production, especially because of its hot and humid climate, which makes it ideal for sugarcane production. Sugarcane, like wheat, is grown extensively on almost 2.17 million hectares of land, resulting in yearly sugar production of nearly 145.39 million tonnes. As a result, Uttar Pradesh has become a major sugar producer.

Punjab
Punjab, often known as the Breakfast of India, is known around the world for its fertile and productive land. Punjab can grow practically any type of fruit, whether it's food grains like wheat or rice, or other crops like sugarcane, fruits and vegetables.
The majority of Punjab's land, over 93 %, is used for the production of food grains, which is expanding year after year. As a result, Punjab is India's third-largest food grain producer. Punjab is noted not just for its fertility, but also for its effective irrigation system, which aids farmers in increasing the efficiency and productivity of their farms.

Gujarat
We all know that the weather in Gujarat makes it difficult to believe that the state ranks among India's top ten agricultural states, but we've also seen the remarkable progress Gujarat has made in recent years. Its strategic investments and planning in industries such as agriculture, energy and manufacturing have helped it advance not only in agriculture but also in a variety of other fields.
Gujarat has surpassed Maharashtra and Telangana to become India's largest cotton producer. It demonstrates how, despite the unpredictability of the weather, Gujarat's farmers and innovative farming techniques have helped the state thrive. Gujarat also produces peanuts, castor, bajra, tur, green gramme and sesamum, paddy, maize and sugarcane in addition to cotton.

Haryana
Haryana's agriculture has seen great growth since the 1970s, despite being a part of India. Haryana is now one of India's major food grain contributors, thanks to the green revolution, modern farming practises and an irrigation infrastructure. Wheat, rice, sugarcane, cotton, oilseeds, pulses, barley, maize, millet and other crops are farmed in Haryana.
When it comes to oilseeds like sunflower, Haryana is the second-largest producer in India. As a result, it is one of India's most important and top ten agricultural states. Haryana's population are involved not just in grain cultivation but also in animal husbandry. Because about 70% of Haryana's population works in agriculture, the public is encouraged to engage in animal husbandry as a source of extra income.

Assam
When it comes to tea, the first state that springs to mind is Assam, which is no surprise given that it is India's largest tea producer. It is one of India's underdeveloped states, despite being one of the top 10 agricultural states. Agriculture is the mainstay of the country's economy, with agriculture employing 70% of the population. However, Assam continues to produce world-class tea, including Nilgiri tea, Darjeeling tea, Assam tea and Kangra tea.

Andhra Pradesh
Another prominent agricultural state in India is Andhra Pradesh. Many major crops are grown there, including rice, jowar, bajra, maize, ragi, legumes, sugarcane and others. Rice is one of the most important crops farmed in Andhra Pradesh.
Andhra Pradesh is known not only for the above crops, but also for its horticulture, or fruit production. Because agriculture employs more than half of Andhra Pradesh's population, the state's agricultural sector is vital.

Karnataka
Because of its favourable climate for a range of crops, Karnataka is the leading producer of coffee, maize, sunflower and ragi. Karnataka's agriculture is vital not just for the state's economy, but also for the country's. Karnataka accounts for 70% of the country's coffee production. Karnataka also has Kharif crops including rice, maize, moong dal, red chilli, sugarcane, peanuts, soybean, turmeric and cotton, as well as rabi crops like mustard, sesamum, barley, wheat and peas.

Chhattisgarh
Chhattisgarh is another key agricultural state in India, as it is one of the country's largest rice producers. Rice agriculture covers over 77 % in Chhattisgarh. Millets and maize are two other important crops grown in Chhattisgarh.
Chhattisgarh is also the country's third-largest producer of Niger seeds, as well as a variety of other crops, including medicinal crops like jamarosa and E. lime, cashew-nut, guava, cheku and mango, as well as spices including ginger, turmeric, methi, coriander, chilli and garlic.
Not only these states, but every state in India plays a vital part in the country's agricultural industry. And this sector will continue to improve as a result of continual improvement and innovation.
We sincerely hope you found this list of India's top ten agricultural states useful.