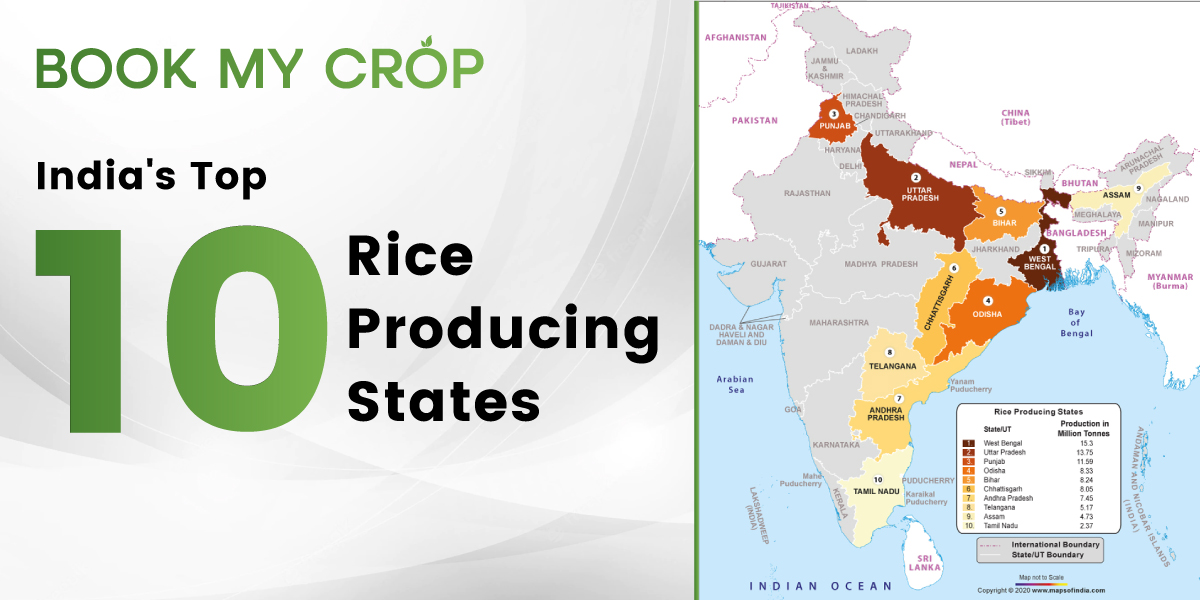 Rice is the mainstay of the Indian cuisine for 40% of the population. Rice, as the most common and widely consumed food, is subjected to certain climatic conditions that allow it to seem as pure white as a diamond and as healthful as any other food item.
Rice's scientific name is Oryza Sativa, which means "paddy rice." Carbohydrates abound in rice. In all sections of India, it is the primary food crop and a critical dietary ingredient.

Other Rice Phrases:
Flaked rice is a type of smoothed or parboiled rice that can be used in a variety of cuisines. Paddy, or smoothed parboiled rice, is used as a fuel and in the manufacture of bricks.

The following are the climatic conditions that must be met in order to grow rice:

1. Rice is a Kharif crop, which necessitates a temperature of at least 25 degrees Celsius.

2. Rice is grown with irrigation in areas with low rainfall, such as the northeast, coastal area and deltaic areas.

3. Higher clay content soils are best suited for rice development and production due to their improved water holding capacity, or water retention capacity.

1. Rainy-Day cultivation.
Rice farming is a form of subsistence farming in the wet state. Clayey soil has a better water-holding capacity and is best suited for wet agriculture, so a level plot of land with an acceptable amount of clayey soil is required.

Because wet farming requires a little amount of land, steps are cut into the hillside to produce terraces that are flat land for rice growing.

Wet cultivation does not necessitate a significant financial commitment. Tractors and wooden ploughs have been used in the past. Irrigation canals are also built to irrigate the fields.

3. Cultivation of Black Rice.
Black rice requires at least 3 to 6 months of warm weather and long growing seasons to produce. This rice prefers strong sunlight and plenty of water. On the other hand, germination requires a consistent temperature of 21 degrees Celsius. Only a few farmers, mostly in Manipur, India's northeastern state, plant black rice.

1. West Bengal
West Bengal is a significant agricultural state in eastern India, despite having only 2.78 percent of the country's cultivable area. In 2014-15, West Bengal produced 14.80 million tonnes of rice, accounting for 14.03 percent of the country's total production and contributing significantly.
Rice is grown by farmers in the lower Gangetic plains, especially in Midnapore, Bardhaman, the 24 Parganas, Birbhum and other regions. As a result, this state is credited with producing the greatest amount of rice in India.

3. Punjab
Punjab is India's third-largest rice producer. The state contains 2.6 million acres dedicated to rice farming, all of which are irrigated.
Water scarcity or shortage due to early summer, as well as unstable intensive rice production systems, the presence of salt and the absence of microelements in the soil lead to a decline in the organic content of the soil, uneven fertilizer use and bacterial leaf blights are some of the limitations for rice production in Punjab.
Basmati 370 rice is the most prevalent type of rice farm in Punjab. Rice has been grown using crop rotation and perennial irrigation sources. Punjab ranks first in terms of rice yield per hectare.

5. Tamil Nadu
Tamil Nadu is the largest and most well-known rice-producing state in India. In the state, rice is farmed on 2.2 million hectares of land. Some of the varieties grown in Tamil Nadu include Amsipiti Dhan, Aravan Kuruva, Aduthurai, Akshayadhan and Ambasamudram.
According to studies, each hectare of rice generates around 39000 kg. In Tamil Nadu, notable rice-producing districts include Tiruvarur, Thanjavur, Tiruvannamalai, Villupuram and Nagapattinam.

6. Bihar
Bihar is the sixth-largest rice producer in the country. Bihar is using cutting-edge technologies to boost rice production and quality.
In the winter, Gautam, Dhanalakshmi, Richhariya and Saroj rice are grown and in the summer, Gautam Pusa-33, Pusa-2-21, CR 44-35 (Saket-4) and Prabhat (90 days only) rice are grown.

8. Odisha
Odisha is India's eighth-largest rice-producing state. Rice is the most important crop, accounting for around 69 percent of farmed land and 63 percent of total food grain area.
Rice is the primary food source for almost all of Odisha's population, hence advances in rice output and productivity have a significant impact on the state's economy.

9. Kerala
Rice is the staple diet of Keralans. Kerala rice farming is well-known across India. We've seen optimistic indicators of a resurgence in rice production in Kerala during the last five years. Rice growers in Palakkad, Kerala's "rice bowl," are expressing fresh happiness.

10. Assam
Assam is rated tenth in rice production, with 45.16 lakh tonnes. Rice production in Assam exceeds 1700 kilograms per acre. Rice farming in Assam is noted for its genetic variety.