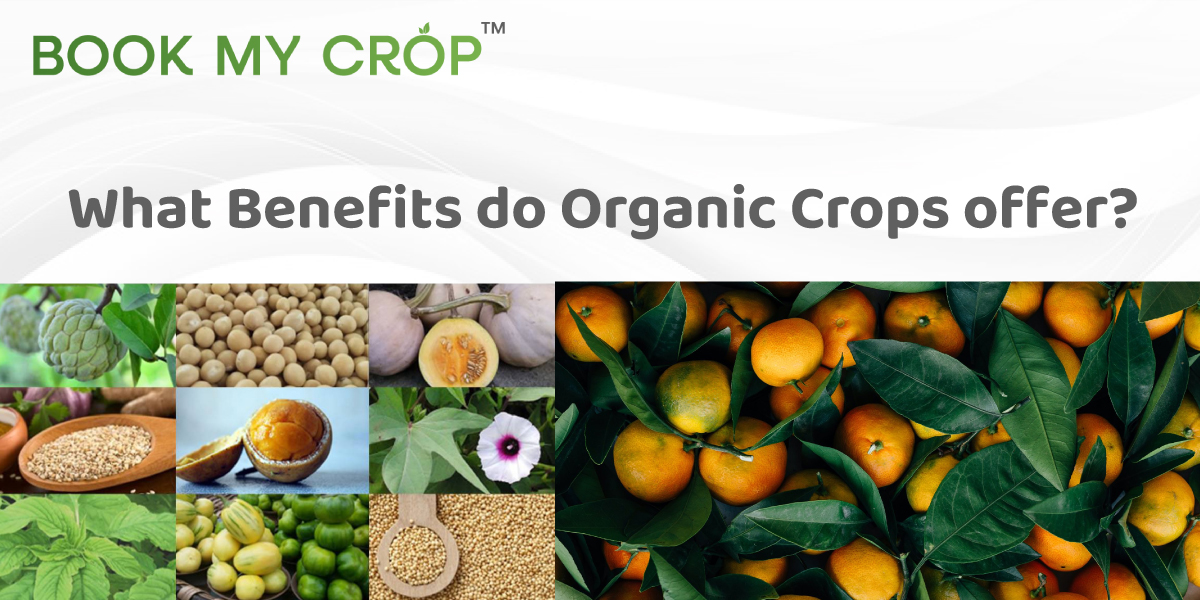 Food that is organic may be more expensive than food that is inorganic, yet it is far better for your health as well as the environment to eat organic food. Read on to learn six compelling arguments in favour of selecting organic food, all of which are supported by factual evidence, as we discuss the benefits of organic eating in this piece of writing.

1. Organic farming results in the production of Fresh food:

Fresh vegetables are obtained directly from farmers when it is organic. At the grocery store, on the contrary, neither the length of time the product was kept in storage before being placed on the shelves nor the length of time it was left out on the floor is known to us. Produce that has travelled from another country may also have been subjected to a long journey before it was even able to cross the border, let alone reach the supermarket. How recent could it possibly be? Every Thursday, Book My Crop, an AI-enabled Agri-tech platform where you can buy online crop seeds in India, makes a trip to the local farmer's market to acquire fresh fruit and vegetables, which it then brings directly to the doorsteps of its customers by the end of the business day. If you raised your own food, it would be the freshest stuff you could possibly eat.

2. Organic farming results in the production of food with higher nutrition:

It should not come as much of a surprise that food produced through organic farming is healthful. The British Nutrition Journal published a study that found that organic foods have higher quantities of antioxidants than foods that were grown using conventional farming methods. In the past, the consumption of antioxidants was linked to a reduced risk of acquiring chronic diseases like neurodegenerative disorders and certain forms of cancer. The study concluded that meeting this goal was equivalent to increasing daily fruit and vegetable consumption by one to two servings.

3. Organic Foods are next to Chemical-Free:

It's common knowledge that the average person ought to consume at least five servings of veggies and fruits every single day. In point of fact, it is recommended that you consume at least ten, but were you aware that produce grown using conventional farming methods may contain significant levels of metals as well as pesticides than the organic produce? Organic agriculture is supported by a stringent certification process, and there are significant limitations placed on the use of pesticides on crops. It was discovered that conventionally grown crops had a frequency of occurrence for pesticide residues that were four times higher than organic crops. In addition, the levels of the potentially cancer-causing element cadmium were found to be 48% lower in the crops grown using organic farming methods than the conventional ones. Cadmium is considered to be a likely human carcinogen. When people who are allergic to chemicals consume organic food, they may see a reduction in the severity of their symptoms. Buy crop seeds online that are chemical free and indulge in organic farming growing chemical-free food with Book My Crop.

4. Ingredients that have not been Genetically Modified:

Organic standards prohibit the use of any substances that have been genetically engineered, and produce that has been cultivated according to these standards is never washed with chlorine. Although genetically modified foods are not widely available in the UK, they are nonetheless used in the majority of conventional animal feeding practices. Because of this, meat, eggs, and dairy items are extremely common in supermarkets yet are rarely labelled.

Organic farming improves the health of the soil and, as a result, decreases the rate of soil degradation. Additionally, in comparison to conventional farming, it results in far reduced contamination of rivers and other waterways. The Soil Association states that making fundamental improvements to the food chain as well as adopting farming practises that are more friendly to the environment could help limit the rate of global warming below 2 degrees Celsius. In most cases, organic farming also draws in a higher variety and quantity of local animals. Pollination is essential to the growth of the majority of the crops that we consume, but unfortunately, numbers are fast falling. A number of academics feel that shifting to more environmentally friendly methods could reverse the trend because of the good impact that it has on biodiversity. On organic farms, there may be up to a 50% greater abundance of plants, insects, and wildlife.

Animals must be provided with ample room, access to pasture, and clean air, as well as be kept in settings that are consistent with their natural behaviours, in order to meet the standards set by the Soil Association for organic farmers. Because of this, farmers will not administer hormones or antibiotics to their animals. One of the most important tenets of organic farming is to practise moral treatment of the animals used in the farming process. If you are concerned about the well-being of animals, it is recommended that you give financial support to organic farming. If you are looking to buy online crop seeds in India, look no further than Book My Crop.

Eating organic food is beneficial for both you and the environment since organic farmers are required to comply with stringent legislative criteria that place an emphasis on the well-being of animals and the health of the soil.