What Can Be Done About Agricultural Pollution And The Environment? 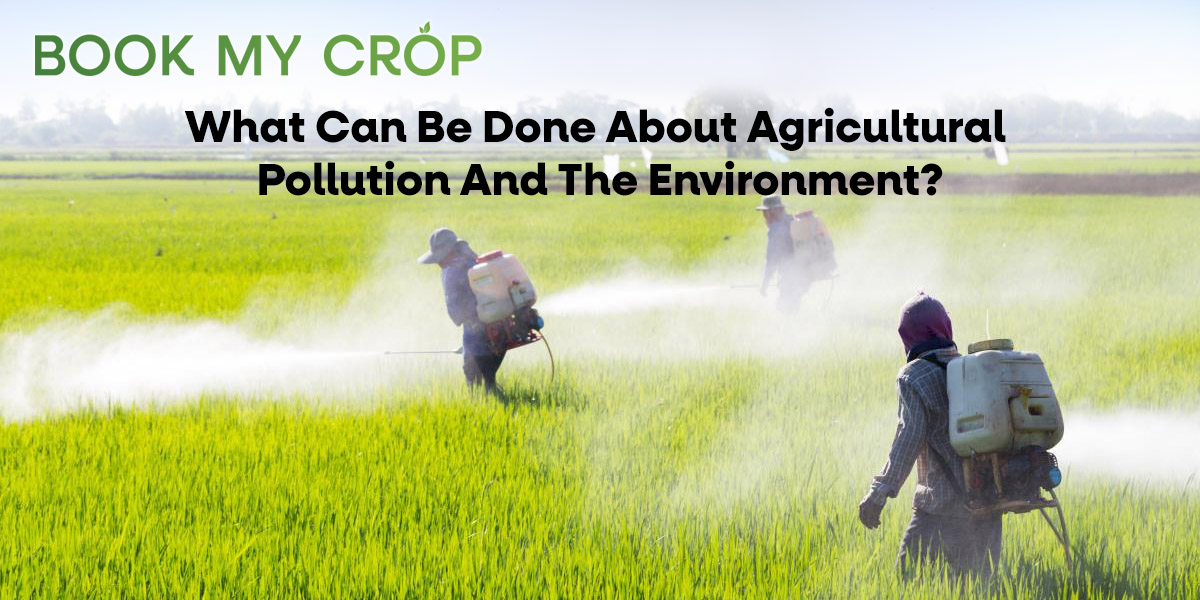 Despite the fact that farming is essential to civilization and provides us with food, energy, and support for all aspects of our life, the rise of industrial agriculture has resulted in significant pollution. Agriculture and ecosystems coexisted in harmony for thousands of years because farmers passed down their land from generation to generation, preserving ecosystems and soils.

However, these farms were additionally more exposed to:

Many of these dangers have been reduced by modern agriculture, but other issues have evolved. Pesticides, fertilizer runoff, greenhouse gas emissions, and hazardous particles are just a few examples of how modern agriculture's inputs and outputs can have unintended effects on ecosystems and people. Fortunately, sustainable farming methods can lessen or even undo the harm that environmental contamination has done.

Agricultural Pollution: What Is It?
Environmental toxins that come from the production of crops (such as biofuel, food, fibre, and cash crops) and animals are known as agricultural pollutants.
Pollutants are generally defined as substances (including both chemicals and energy) that harm or inconvenience people or other living things while also harming the environment.
Even while pollutants can occur naturally, they are regarded as contaminants when their quantities are higher than they should be. They can also be divided into:

Agricultural pollution can sometimes be quite unobtrusive; for instance, noise pollution can include the hum of a tractor. Other types of agricultural pollution, however, have the potential to do great harm. For example, large farm fields covering thousands of acres can increase issues like eutrophication, climate change, biodiversity loss, and other issues.

1.Pesticides and fertilizer - By reducing crop damage and momentarily increasing yields, modern inputs like pesticides and fertilizers have undeniably changed agriculture. Pesticides like insecticides, herbicides, and fungicides, as well as fertilizer high in nutrients like phosphorus and nitrogen, must be handled by the environment after use. Some of these substances will be absorbed by the plant. This can have a domino effect on ecosystems and human health, contaminating runoff and groundwater, drinking water, and the air through greenhouse gas emissions (such as nitrous oxide, carbon dioxide, and methane). Additionally, burning fossil fuels a process that consumes a lot of energy and contributes to climate change is necessary for the production of these inputs.

2.Contaminated Water- Another form of contamination in agriculture is contaminated irrigation water. Rainfall, irrigation canals, and groundwater reservoirs provide the majority of the water utilized for irrigation. Moreover, while many of these water sources are free of pollutants like nitrates and pesticides, other sources are contaminated with organic compounds, heavy metals like mercury, arsenic, lead, and cadmium that can contaminate soil resources and taint crops, as well as pathogens that can contribute to foodborne illness. Naturally, this has an impact on both the health of the ecosystem and the general populace.

3.Sedimentation and Soil erosion-The top layer of soil, which has multiple layers, is used for grazing and cultivation. This priceless natural resource is prone to erosion by wind and rain due to poor land management practises, including excessive and inefficient tillage, and decreased fertility due to the depletion of soil carbon (which in turn leads to the need for ever-increasing quantities of fertilizer and pesticides). Millions of tones of soil are lost to erosion each year, and the soil particles that get into the streams cause sedimentation (a process in which particulate matter clouds waterways and blocks sunlight needed by aquatic plants, thereby damaging aquatic ecosystems).

4.Agriculture - Additionally, manure from animals like chickens, pigs, lambs, and cattle pollutes both the air and the water. Due to the massive scale of these operations, which produce millions of tones of manure annually, and the close proximity of farm animals within a feedlot, concentrated animal feeding operations (CAFOs) are a significant source of pollution. This garbage is frequently deposited in lagoons, where it contaminates groundwater with dangerous substances like antibiotics and fertilizers.

5.Weeds and Pests-  Local ecosystems frequently experience issues as a result of the introduction of non-native crops through agricultural production systems to new geographies. Newly introduced species, including plants and insects, frequently become invasive in the absence of natural predators, increasing competition among native species for vital food and light resources. Because they have not evolved defenses against these non-native creatures, native species may also be more susceptible to introduced pests and diseases.

What Harms the Environment Does Agricultural Pollution Cause?

Habitat loss and Modification for wildlife
Agriculture-related pollution can endanger ecosystems and the crucial services they provide. A wide variety of ecologically and economically significant creatures, including as pollinators, natural predators, birds, and microbial ecosystems, can be harmed by some pesticides, for instance. For instance, 35% of all food production depends on pollinators, who may be adversely affected by pesticide residues on plants and direct interaction with chemicals.

Introduction of viruses, nutrients, and hazardous chemicals
As was already indicated, a variety of agricultural inputs, including pesticides, fertilizer, and antibiotics from animal agriculture, find their way into drinking water, which can have an effect on human health. Numerous of these contaminants are well-known carcinogens and are notoriously challenging to eliminate from drinking water. Agricultural pollution has rendered drinking water unusable in many parts of the world, from China to the United States.

Exotic Species
Introducing exotic species through agriculture can affect local wildlife and vegetation, permanently changing ecosystems. Native species can sometimes face extinction if they are unable to adapt to new diseases or pests that have been introduced, or if they are unable to compete with new species that lack natural predators. This was the case with the American chestnut, which was almost exterminated as a result of a disease brought in by the Chinese chestnut.

Modifications to the hydrologic cycle
Agricultural methods like drainage tiling may make agricultural water contamination worse. While faster-draining fields allow for greater amounts of fertilizers and pesticides to enter rivers and worsen issues like eutrophication, they also diminish filtration, which reduces productivity even when tiling an agricultural field boosts output.

Changing weather
Climate change involves not just global warming but also increasingly frequent extreme weather events, shifting dynamics of diseases, and pests, all of which have a significant impact on agriculture. It is one of the biggest and most complex problems facing our planet today. A significant portion of greenhouse gas emissions are caused by agriculture, which exacerbates climate change by building up in the atmosphere and trapping heat.

How Much Pollution Does Agriculture Produce?
Despite varying figures, the US EPA claims that agriculture is responsible for 24% of the world's greenhouse gas emissions, of which 14.5% come from animal agriculture. Additionally, because to pollution and habitat damage from agriculture, up to 78% of freshwater eutrophication is caused by this industry, and 24,000 species face extinction.

How Can Farmers Lessen Their Impact on the Environment?
Farmers can use a variety of land management techniques to lessen their environmental effect, enhance air and water quality, and promote ecosystems and public health.

Using Conservation Tillage and Cover Crops
Many farmers use a technique called conservation tillage, which is any tillage regime that leaves 30% of the soil surface covered with residue, to lessen soil erosion on their farms. Intense precipitation events are less likely to result in soil erosion and runoff when residue is left on the soil's surface or when new plants are planted into residue left over from a previous crop. This is because the roots and vegetation from earlier plantings act as a barrier between the soil and the wind and rain.
Together with conservation tillage, cover crops can be grown in a variety of combinations throughout the year to prevent erosion and enhance soil quality. In order to maintain ground cover, reduce runoff, increase soil organic matter, absorb nutrients, and feed the soil microbiome, cover crops are planted during fallow periods. Cold season cover crops like oats, vetch, and rye, as well as warm season cover crops like sorghum-sudangrass and cowpeas. There are numerous advantages to using cover crops and conservation tillage, and there are numerous incentive programmes with the USDA and other government organizations that reward farmers for using these land-use techniques.

Plants may be carefully chosen for these locations based on their unique root systems, growth patterns, absorptive capabilities, or ecological functions. For instance, "riparian" buffers are a particular type of buffer system that comprise mixtures of perennials, shrubs, and trees that enhance stream quality. Likewise, federal institutions like the EPA and USDA, frequently in collaboration with regional environmental organizations, support the planting of buffer zones.

Management of manure
One of the many essential actions farmers must take to decrease agricultural pollution is properly managing animal waste. Manure, which contains vital nutrients like nitrogen and phosphorus, can be a valuable source of organic matter and fertility when applied to crops in the right proportions and at the right time. To minimize nitrogen loads on farms and safeguard significant watersheds, some regional governments have started implementing manure management laws and incentive schemes. Many areas, like the Chesapeake Bay, have imposed nutrient load restrictions for crops.
Furthermore, some farmers are already using "digesters" cutting-edge technologies that turn methane from manure into electricity to lessen the carbon impact of their operations.