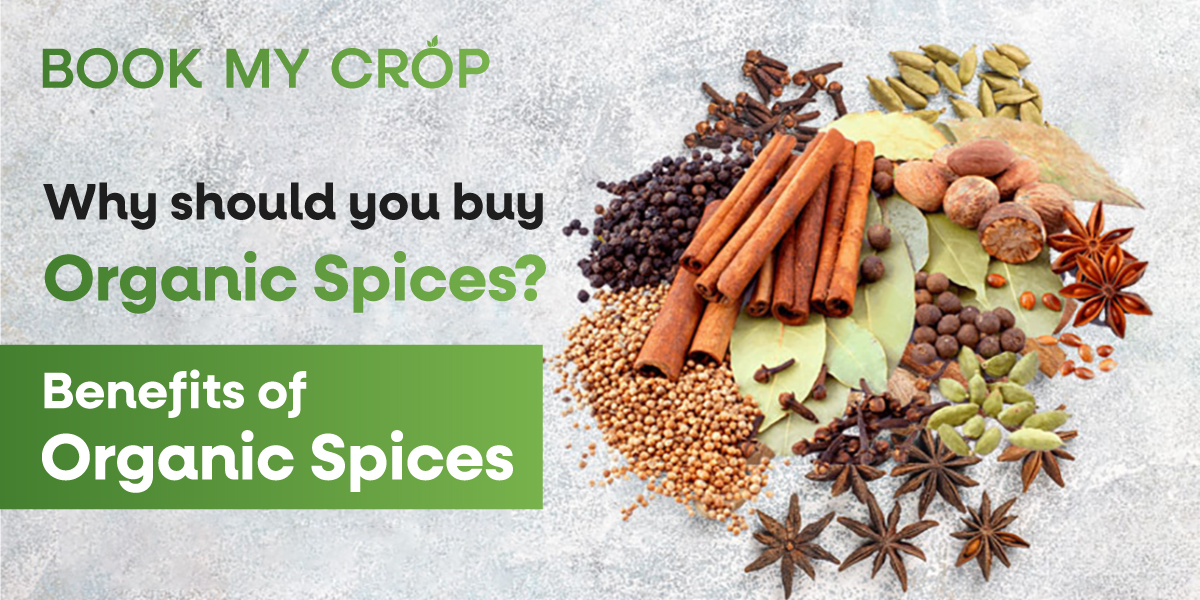 What is organic food and why is it so good for you? Pesticides, artificial growth inhibitors and hormones are not used in the production of organic foods, which are cultivated without the use of synthetic chemicals. Organic food can be pricey at first, but after we understand the benefits, it is well worth the investment. Apart from contributing flavour and colour to meals, spices have a plethora of health advantages of their own.

Spices are necessary elements in Indian cuisine for a variety of dishes. Spices provide dimension to practically any dish preparation by providing a spicy compliment. Because spices are such an integral part of every cuisine, buyers are increasingly demanding organic spices. Here are some of the reasons why we should choose organic spices.

Our immune system is strengthened.
Genetic modification's glimmer of hope has recently been called into question. Because it is in its early stages, the influence on human health is unknown. While there are certain advantages to genetically modified crops, we should consider if the long-term risks are worth taking.

Toxic substances are avoided.
Traditional spices, like any other commercially grown food, are treated with chemicals and synthetic additives such as fertilisers, pesticides and sludges to encourage faster development. Those chemicals nearly always make their way into the soil, where they are eaten by the spice plant and finally end up on your plate. Organic spices are grown without synthetic fertilisers, pesticides, genetically modified crops, sewage sludge, or pollutants, resulting in cleaner, healthier food ingredients.
In order to avoid lump formation when packaging powdered spices, anti-clumping chemicals are commonly used. In order to maintain product credibility, organic spices do not use anti-caking chemicals. Adulteration, artificial flavourings, and preservatives are all absent from organic spices. Because of the stringent quality control, this procedure is often more hygienic.

Consumption of more antioxidants.
Antioxidants have a stronger impact on the nutritional content of organic spices when compared to normal spices, more so than any external chemicals that interfere with and alter the nutritional composition of organic spices. Several studies have also confirmed the reality. Which tends to reduce negativity while increasing positive ones. Don't you think it sounds quite good?

The food's flavour improves and it becomes more nutritious.
Spices have a high nutrient content since they are fertilised with organic manure and bio fertilisers when cultivated organically. Organically grown spices offer a fresher scent and taste due to the absence of artificial ingredients that alter the chemical composition.
Organic spices, herbs, and seasoning blends are all 100 percent organic certified and go through a rigorous quality assurance process to ensure product safety. The Indian government has launched a National Organic Production Program (NPOP). The accreditation process for certification bodies, organic production criteria, and organic agricultural promotion are all part of the national programme. The NPOP standards for the development and accreditation procedure for unprocessed plant products have been acknowledged by the European Commission and Switzerland as being comparable to their country's requirements. Similarly, the USDA has recognised NPOP certification conformity evaluation processes as similar to US accreditation standards.
Organically farmed crops also prevent pollution of the soil, water sources, and water table, in addition to the health benefits. While much research is being done to determine whether organically grown spices are genuinely more useful than those grown with chemicals, it does not appear to have the negative consequences of chemicals, which would make the extra money worth it. So think organic if you want to think good!